I still remember when I first arrived in Thailand and the markets were this new, exciting, wondrous thing. As we took our first baby steps out of the Golden Dragon Hotel in Sing Buri we starting running into the churning whirlpool of commerce that is Thailand. I remember commenting to another Volunteer at the time that Sing Buri seemed like it was 80% market.

We walked through the now familiar dta-laat-nat for the first time with fresh eyes. Booths selling clothes of all kinds, from formal wear to booty shorts, lined every row. Vendors hocked exotic goods like live frogs, eels, and crispy fried insects. We walked past booths lined with bootleg copies of popular movies, covers clearly photocopied from the original, a hazy and unclear iPhone recording in a movie theater playing on a small screen within the booth, a preview of the products on sale. I walked through it with another Volunteer for what seemed like an hour with no end in sight before we decided it was time to just turn around and go back, and that market isn’t even a tenth as large as the Chatuchak Market in Bangkok.

Now that I have been here for a while that initial fresh perspective has worn off. Although that takes some of the newness and excitement out of the spectacle that is the Thailand market, it also allows me to see other things that I missed back in those early days.

I think about the Night Market in my home city of Kamphaeng Phet. My home is located within short biking distance of the city, so I have the opportunity to visit the daily market often. It takes up an entire city block near the river downtown and is open every day and night.

I often wonder how the market sprung up in the first place. Was it stall by stall? Each vendor moving in one at a time, placing their metal cart with the little glass case for showing off their wares next to the last person until it took up a whole city block? Or was it a small collection of carts and stalls near a parking lot that spread to become what it currently is? Maybe the city planned the whole thing from top to bottom. I suppose I could just ask someone.

Regardless of how it sprang up, everything seems to have its place among the chaotic assortment of stalls and carts, as if everyone knew exactly how it would look when it was all done without having ever talked about it. The guy sweating over the pad-see-ew and rad-na noodles in his giant wok in the center of the market, the ice cream stall at the end of the row near the married couple selling the same knock-off shoes you see at every market in Thailand, the kanoms, the sandals, the button-up shirts, the kitchen supplies, the guai-dtiao and the kaao-man-gai. 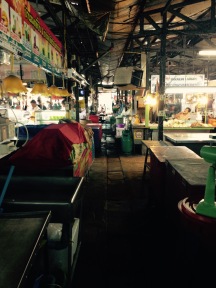 Just like every other market, it has its dirt, too. The layers of grime on everything permanent are astounding, but no one seems to take notice of it. As long as their noodles are hot, tasty, and clean they don’t seem to mind. People go about their way, seemingly unperturbed by the things they have no control over. 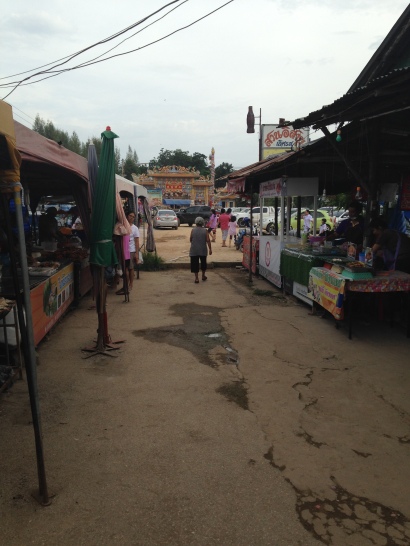 People sit and chew thoughtfully or talk and laugh with their friends among the churning mass of the market. Order among the chaos, เฉยๆ in the flesh. A few of the vendors have small playpens in the market if you care to look for them. These fascinating little squares of care and play and freedom stand out amidst the commotion of hungry people and consumers. If you look carefully, you can see the children sleeping in lawn chairs or on wooden platforms as their parents and cousins toil the night away. 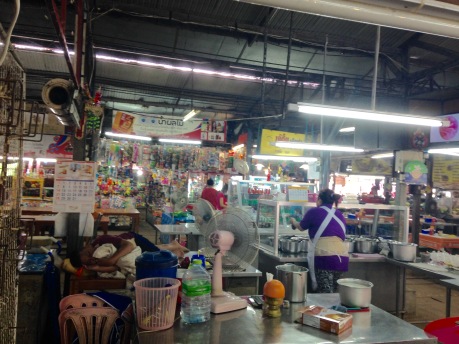 This isn’t just a place where people work, or a place for people to shop. For many of them this is where they spend the vast majority of their time. They raise their kids here, their sons and daughters learn about how their parents support them and what their lives are like because they’re there to see it. I’m 30 years old and I still can’t explain what it is that my dad does for work. I would also be willing to bet that most, if not all, of these vendors know each other as friends and family.

One thing anyone will notice if they walk through enough markets in Thailand is that there are often a dozen booths selling the same exact things, often for the same exact price. I recently walked through a market near Chiang Mai with my counterparts from the municipal government office and realized after a few minutes that there were a hundred booths, but they were all selling the same things — in this case fried pork skin, dried fruit, and sausages. The ones that didn’t have food items all had the same ceramic figurines and other kitschy doo-dads. Dozens and dozens of booths all with the same exact stuff in them. 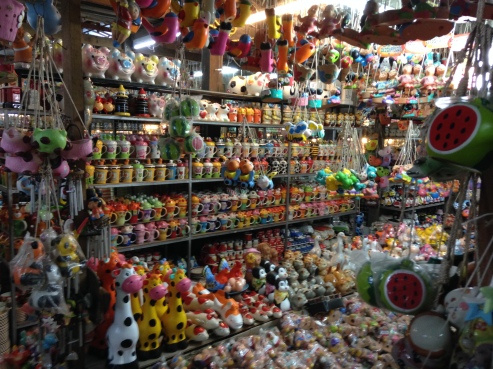 I thought about this as we walked through the market and tasted the offerings at each booth, even though they all looked the same to me. My friend Aom told me to walk around and look more before buying anything. After about thirty minutes of wandering I noticed that everyone was buying things not for themselves, but to bring home to friends and family, and that they bought products from different booths. Fifty baht worth of fried pork skin at this booth, one hundred baht worth of sausage at that one, eighty baht worth of dried strawberries from this one. Even though they could have bought them all at the same place they patronized dozens of different booths.

Shopping and markets are such a huge part of the culture here in Thailand. I often feel like Thai people are just shopping for the pure fun of it, and despite my storied history of hating casual shopping, I find myself drawn into it as well. At the end of the day you get to participate in an important aspect of the Thai tradition, contribute to the economy, and show some naam-jai in the process.
That seems worth the hundred or so baht to me.