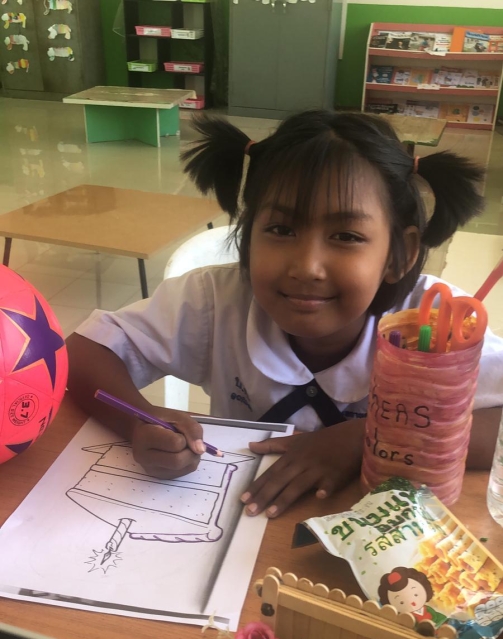 We aren’t supposed to have favorites and I don’t. But if you were to ask me which of my students I think could change the world I would likely say Bam. When I look at the privileges that everyone has, I know Bam’s privilege meter is low. She is dark-skinned, she is a girl, and her family isn’t the most well off. There are even times where I think about all the challenges she’ll have to face and have to deal with. If there is one thing that counteracts her low-privilege it’s her tenacity, it’s her intelligence, and it’s her kindness.

She is the pinnacle of everything I try to teach; when I first met her, I deemed her to be a bit of a suck-up because she always had to be done first, always had to say good morning to me about 10 times before morning assembly, always needed my eyes on her. I was looking at her, but I did not see her. Until one day right before the end of the semester she was given a haircut. It was one of the worst haircuts I had ever seen, and then she faded. She didn’t want to say good morning not once, she needed pushing to finish her work, she hid in the corners of the classroom and no longer wanted attention, she would hide behind a hoodie silently threatening to give herself heatstroke. So, I gave her extra attention, more hugs, more praise, more. Throughout Bpit-Term (school break) I couldn’t stop thinking of her. Every conversation I had with my mother was about Bam, usually with me saying how messed up it is that people can control another’s confidence by controlling their appearance. When the semester started Bam was emerging again, her hair hadn’t grown back all the way but the pieces of it that were originally uneven looked better.

Now that I was in a place where I really saw Bam, I started noticing things about her. That semester I sat her with a student that she didn’t really like, Third Grade drama I guess. The semester started with Bam occasionally hitting the student and telling her to go away. No shared pencils, no shared answers, I honestly think Bam didn’t want to share the same air. But one day during a particularly overwhelming lesson Bam noticed the other student was on the verge of tears, and to my disbelief she pulled the student’s deadweight body to her and hugged her and just wouldn’t let go. After that Bam was this students support system. I see them share answers, toys, and time together eating ice cream or getting soda. Bam no longer allows this student to enter class last and they enter together and leave together.

Confidence in my class is key, I encourage every student to be sure of themselves and if they aren’t then fake it cause eventually it’ll become real, and when I see confidence in my girls I hype it up. I have this practice in my class called student of the week, where this student helps me run the class, they are the first example for a lot of the practices, they tell us the day of the week, and they have to ask every student how they are.  When it was Bam’s turn I saw that new confidence because she came straight to my desk, grabbed the flashcards, said loud and proud “Students!” waited, then surprising my co-teacher and I yelled the following “One, two, three! Eyes on me!” and everyone responded “One, two! Eyes on you!”

My co-teacher whispered “Did you tell her to say that?”

Here was a girl who not only wanted attention, but demanded it from her peers. She knew that this was her moment and everyone needed to pay attention to her. Even if they are just reciting flashcards, she is not afraid to take up space and I hope that quality never gets crushed or diluted. I want her to believe that every space is her space if she wants it to be.

Bam has this kind of desire to learn and to teach and I think that is one of the greatest qualities to have, I suppose in a lot of ways we share a very common goal. I have observed her teaching fellow students and while I find that to be fairly normal, it’s what she does after school that often surprises me. Again, mind you, this is a third grader. I came to learn what she did after school when her parents stopped me on the road before school and started asking me questions, including but not limited to name, age, how was I doing, what my job was, what foods do I like, and what I don’t like, then they also proceeded to say a couple of the alphabet letters. Weird but okay. Later I asked Bam if her parents speak English. Nope, she teaches them. She occasionally comes into my class to collect leftover papers, which I initially thought was for her to draw or just use, but she has been taking them home because she likes to teach her family. I asked her what does she want to be when she gets older, teacher is always the answer.

I like to think that after I leave all of my girls will be okay. But Bam is one that I am not so worried about anymore, with a little more time I believe that she will develop and grow into someone who can take on the world with little care of how society views her.  I hope that she is someone I get to read about one day and when 20 years passes, I hope she finds me and tells me what she’s done. I hope she never stops being kind, I hope she never stops being strong, I hope she takes control of every room she enters and makes the changes she wants.