Peace Corps or a Series of Controlled Falls

So last Wednesday, I went on the first honest-to-God run I’ve been on in, man, at least a few years. I was pretty out of shape for most of college, so I wasn’t sure how I’d fare or how far I could even go, but given the fact that my daily biking commute is fairly substantial, which has led to a bit of weight loss, I was eager to see where I was at. I didn’t time myself, although I have no doubt I’m setting no speed records, and to my pleasant surprise, I knocked out a cool 5k. And then, I did it again on Friday. And again on Monday. And again today. Big picture, it’s not particularly far, but it’s five kilometers more than I knew I could go two weeks ago and that feels good.

At one point on that first run, I was joined by one of my local four-legged friends, and as she trotted next to me, I found myself comparing her gait to mine. Where she certainly had the speed, easily able to catch up and pass me by, I couldn’t help but think that in terms of endurance, a more athletic man than myself would have her beat. While she propelled herself forward on the strength of her own four feet alone, her ears and tongue flapping wildly as she did, I and every other biped adopt a different, more energy-efficient strategy; we allow gravity to do the work for us. Instead of fighting it like my furry companion, we simply lean into it, and as we begin to lose balance, we put one foot in front of the other and catch ourselves before we fall. Rinse and repeat. Rinse and Repeat. Walking. Running.

Maybe that might seem obvious, unnecessarily explained, but in my case, I had just never really thought about it. I just walked. I put one foot forward, and then the next, and that was it. I never delved any deeper into the physics of such a seemingly simple action. And yet, there I found myself thinking about it and thinking about it and coming to realize how familiar that concept felt, the idea of perpetually plummeting forward and trusting your own two feet to catch you and bring you that next step forward. And suddenly, I knew why it felt so familiar; it’s because I had been doing just that for the past eight months.

The voyage that has been Peace Corps thus far has felt very much the same as that first time lacing up my sneakers and leaning unfamiliar into that fundamental force to pull me forward into each next step – getting on the plane in Los Angeles, leaving the hotel in Suphan Buri to live with a family I didn’t know or even speak the same language as, and then doing that again three months later, except this time without my fellow volunteers. Even on a smaller scale, this is what we as volunteers do every day at site: say yes to participating in an event that we don’t quite understand, responding to a question of which we’re not sure we have the words to answer, getting on a bus and praying it’s heading to where we think it is. All of these instances are small momentary tumbles. We throw ourselves into that precipice of uncertainty, maybe confident or maybe not in our ability to keep ourselves upright on impact and carry on pushing forward. 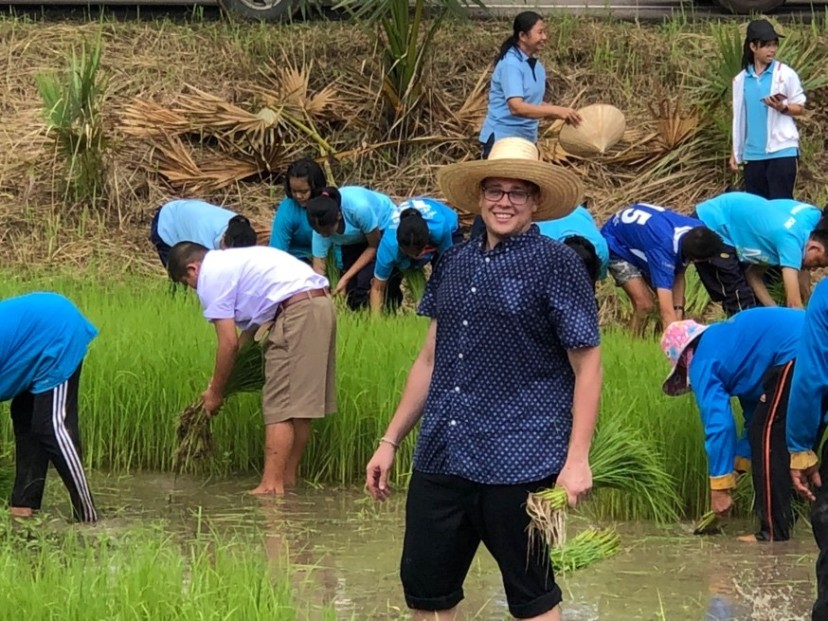 A few weeks ago, I was asked to show up at the SAO on Saturday morning early for a work event wearing a blue work shirt and long pants. And that was all I understood. No idea what we were actually doing, but thus is service it seems. I was particularly exhausted after what felt like a 365-day long week, and I almost said, “No.” I almost said, “I’m too tired. I don’t wanna repeat everything I say three times all day tomorrow. I wanna sit at home in shorts and a t-shirt and read my book in English.” But, I didn’t. I said, “Of course, what time should I be at the SAO?” And lo and behold, the next day I showed up in slacks, a button-down, and dress shoes. And what were we doing? Well, we were harvesting rice, of course. Of course.

Yet, much to my surprise and maybe as cliché as it may now sound, it ended being the day that I really realized how integrated I felt in the community and how much I enjoyed events like these, events that don’t necessarily fall into the YinD framework, but let us delve into the deeper Thai culture that allow us to interact with people we don’t typically see on a weekly basis. To hear them call me by my name. To hear them proudly effuse how well I could eat som tum (papaya salad) no matter how many chilis they put in it. And to suddenly feel that much more confident in what the hell I’m doing here. In that moment, I think I realized how truly happy I was to let gravity guide me and trust I’d catch myself on the way down.

So. Running. Even just a month ago, I would have said, “I hate it. Absolutely and totally.” But now, I think I see it differently. Whereas before all I could remember was how out of breath and sweaty, exhausted and sore, just wiped out I felt after even just a short run, now I focus on something else. I think about how good the impact of my feet to the pavement feels knowing that I’ve got it. That I can do this. That I’ve curbed the fall and can take the next plunge. And now, I love the feeling of after. I love when I’m out of breath and sweaty, when my endorphins are pumping, when I taste that first sip of cool water and look back proud of what I just did. And that’s how I feel. About all of this. I’m excited. I’m excited to find myself eight months deep into this journey of controlled falls.