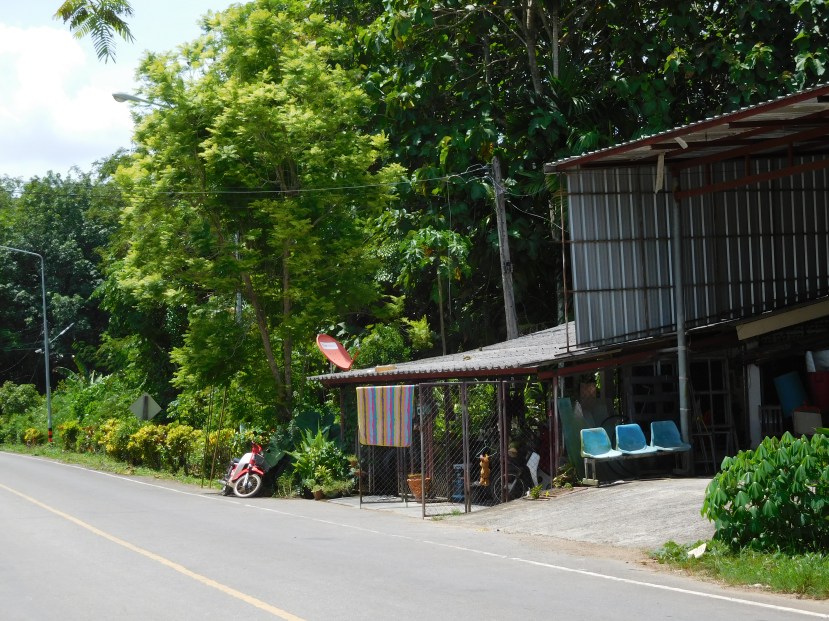 I could sense it as I rounded the bend. It had been two days since I last saw his spiky gray hair and heard his lilted, “Wadii Kru!” Every morning and afternoon I passed by expecting to see him sitting out in front of his house doing some gardening, doing something questionably dangerous with a sickle, or just watching the traffic go by. Each time I passed, I was ready for his greeting and salute. Just three days ago, he called me over to give me a ripe mango. The last time he gave me a gift, he asked me to choose between a sweet mango and a Thai dessert. Guess which one I chose and what he filed away to give to me again? That small gesture warmed the cold cockles of my heart and reminded me of the kindness between neighbors and strangers alike.

Looking up and seeing the row of motorbikes parked outside of the typically clear road, I knew that he was gone. Instead of him perching on his lone chair, there was a crowd of people. Ba Mim waved me over and told me what happened. He was showering and slipped. Hit his head. That was two days ago, and he just passed this afternoon. He was over 90 years old and had lived a long life. She told me all of this with a smile on her face. A smile. I was incredulous. I had to school my own features to stay neutral, though inside I could feel the emotions swelling up. I needed to make a quick escape before they bubbled over, and I broke face. As I was walking away a thought jumped into my mind. Turning back, I asked Ba Mim, “What was his name?” She replied, “Ged. Tha Ged.” Grandpa Ged. In the year I have been living here, I hadn’t found anyone who could tell me this bit of information. Neighbors, teachers, community members couldn’t answer my question. Not until now, and it was too late.

It may seem silly to be upset over an old man whom I barely knew. Even I had to wonder why my emotions were so affected by his death. Perhaps, it is because he was the very first person to acknowledge me when I moved into the neighborhood, and the only person who befriended me of his own volition. Thinking back, I know it is because he accepted my presence here without any judgments, comments, or demands. I have had very few encounters in my life where a person has let our relationship unfold in an organic way. We shared bits and pieces of ourselves through our short interactions because it was natural. No extreme probing into my personal life or need to explain myself, which is a rarity here. This is what I appreciated the most from Tha Ged and from our easy friendship. It was limited, but uncomplicated and always full of warmth.

The following day I couldn’t look at his house without wanting to cry. At school, I was able to distract myself by staying busy. First, I taught three classes, and then, it was time to serve the students lunch. A free period? Well that was the time to do more lesson planning, answer emails, and write up the logistics for a future teacher training. I had put my thoughts about death on the back burner until the first grade teacher interrupted by coming to ask me about him.

With that, she left, and death was brought back to the forefront of my thoughts. I dwelled on the deaths of my friend and an uncle who passed this past year as well as the community deaths that greeted me after the school break. My sadness threatened to overtake me before I remembered where I was. Coming back to the present, I checked the clock. It was time for another class, then, another free period, and at last, the end of the school day.

Over the next couple of days, I attended the funeral and endured the curious looks of those who were also there. I could hear their thoughts as they unabashedly stared at me. Who is that? Isn’t that the foreign teacher? She teaches Chinese, right? I wonder why she’s here? As I tried to ignore them, I glanced up at his portrait at the far end of the dining hall. The monks finished their chanting, their chairs empty. The wreaths, fans, and candles surrounded his casket. I studied his face, the deep wrinkles, the slight jowls sagging, and his dark eyes. In that moment, I missed his calming presence and effervescence. I especially missed him amidst the chatter of Pii Ea explaining to someone who I am. She’s from America. Why does she look like us? She’s a half-y. No, I’m not. Her father is American. She meant white. And, no, he’s not. I thought to myself, Tha Ged would have asked me where I was going instead of where I came from. I paused on his face for another moment, grateful for our short encounters this past year before I turned back to my table and pretended not to understand Southern Thai. I was too exhausted to explain yet again.

Now, with weeks having passed since his funeral, I am more used to his absence. I still glance up at the front of his house whenever I go by, and it feels empty and lifeless without him there. Sometimes, I imagine him sitting there, watching the people speed down the road to unknown destinations. He’ll call me over to chat with me or to give me some sage advice in his rough Southern Thai, most of which I confess I could not comprehend. Or perhaps, he’ll point at the dark clouds looming above us and wave his hand quickly to hurry me along before the rain begins to fall.