This Could Have Been a Love Story 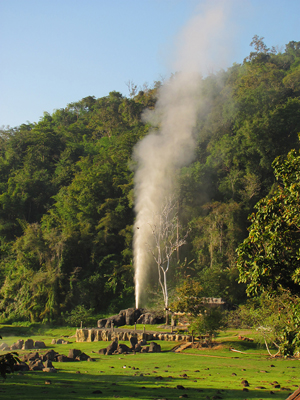 I met Nit at a national park where a geyser shoots steaming hot water into the air. She worked at the service desk. Her cheeks were dimpled, her eyes shining, her black hair tinted ember red, and she was tall. Almost as tall as me.

She was from Phrao; she had been a first grade teacher; she missed her family; she was Christian; she lived in the city nearby; she liked shopping; she was on a diet.

I was not a Christian, I hated shopping, I’d never been on a diet before, and I couldn’t understand why she was no longer a teacher—but I was swimming in a conversation where smiles and eye contact communicated more than words.

I taught the staff some English after that. Near the end, she said “Kaw Line dai mai?”

My brain has directed many fantasies over my life, but it’s become prolific in Thailand. A pretty girl talks to me, and I imagine firework onto the screen: me as an orange farmer, tossing baskets of oranges into the bed of a pickup truck driven by her, slightly older, still beautiful; Her and I walking around a newly purchased teak wood mansion, I dance on the wide open floor so she’ll laugh; us laying in side by side hammocks overlooking a green valley splotched with rice paddies, swaying, and feeling her hand grasp mine as we drift off to sleep. Plus all the fantasies I can’t write about because…this isn’t that kind of magazine.

I’ve learned to ignore these thoughts because they flicker and evaporate within a few days. Or hours. Usually hours. Reality dumps water over the flame.

We kept talking on Line and in person. Nothing heavy: What are you eating, what are you doing, how are you—stuff like that.

One day in December, Nit invited me to the walking street with her.

And the rest of the service staff.

Yes, yes, yes! I will go. Action. Roll camera. We would talk about ambitions, happiness, frustration, failures, hopes, secrets, desires, and regrets. Yes! It would happen just exactly like that. No doubt.

We hung around the parking lot waiting to get picked up, and I didn’t know what to do. So I stood stiff as a mannequin and tried to smile so big no one noticed my lack of movement.

Nit took out her phone, and started talking into it. I kept smiling.

In the car, she was still on her phone.

At the walking street, she was still on her phone. We walked through a river of people, down aisles of endless food, clothes, and knick-knacks. I bought fried onions, a salad, some passionfruit juice, sweet corn, and a tiny succulent. She bought dumplings, dragon-fruit, sushi, princess stickers, and a coloring book.

We stopped to eat Kanom Jeen on shin-high tables in between the aisles of the market. We sat across from each other. While she ate, she kept her head down.

After a conversation between a forest ranger and Nit that I couldn’t keep up with, the forest ranger pointed at me and said, “Tim could be your boyfriend.”

My face was still stuffed with noodles. I swallowed quickly.

“Will you be my boyfriend?” Nit asked.

I put my chopsticks down, looked skyward, and said, “I need to know you better.”

“You need to know me better than you do right now?”

Nit glanced at the forest ranger, nodded, and went back to eating.

I tried to eat more noodles, but the bowl contained only blood red broth. I balanced the chopsticks over the mouth of the bowl and looked anywhere but across from me.

Logic is my default setting. I tell myself my time is full. I barely have time for myself. Then, I say I don’t know anything about her. I know she is attractive and nice to me—that’s all. If that logic doesn’t work, I tell myself I’m lonely, that my thoughts are a result of being isolated from a familiar language and culture. If my brain still isn’t listening, I’ll say: You’re going home soon, dummy.

The next three months I didn’t go to the national park.

That’s a lie. I went once, and when I entered the staff room, everyone went quiet, like they’d been talking about me.

I was invited to a Winter Festival in the city, but I said I was tired and went home instead.

During the summer, sweating enough to fill a canal, I biked back to the national park. Nit wasn’t there. She was taking a nap.

My friend and I walked around the park wearing N-95s because of the pollution. When we got back, Nit was back, too. We greeted each other. Her cheeks were rounder and her clothing was baggier than I had seen her wear before.

“Nit is going to have a baby,” said my friend.

“Really? Wow, congratulations,” I said. “How many months now?”

I paused. Then said, “That’s wonderful.” She smiled and I couldn’t stop myself from smiling back.

“Goodbye,” she said in English, “See you again.” Her smile again. Bigger now, flushed, but weary too.

“Goodbye,” I said, and I wasn’t sure if I felt upset or happy or indifferent or judgmental or stupid or jealous or relieved or embarrassed or anything, so I hurried out. Sometimes, it’s best not to think. As I sped down the mountain on my bike, I focused on the wind flying past my ears and the road curving out of sight ahead. The mountain disappeared in swathes of trees behind me.