There is no getting over the feeling of “otherness” for an Asian American in Thailand (or America for that matter). Those struggles that I have talked about, and countless others have mentioned, still plague me now. Here, 17 months into my service, it’s relentless. Just before the school break, one of the teachers at my school finally understood that my ethnicity is Vietnamese, but my nationality is American. Haven’t we been over this a thousand times already? Why isn’t this something you bothered to learn when we first met? Did your curiosity only pique a year into knowing me?

I would be lying if I said it didn’t bother me when my white friends come visit me in my community and the people here fawn over them. I had a less than lukewarm welcome to my community, and it took months for anyone to approach me and ask me who I was. My friend, the cha yen (Thai tea) lady, has never once asked me for a picture, but did the second I introduced her to a white PCV. These feelings are fleeting, though nevertheless, they are there. It brings me guilt for resenting friends who can’t change how they look nor how my Thai community reacts to them.

So when I go visit other PCVs’ sites, there is that bit of dread mixed in with the excitement of experiencing their service. The running dialogue in my head oscillates between joy at meeting their families, counterparts, students, and neighbors and the annoyance of knowing that I will have to explain my existence. How can one be both Asian and American without being a half-this or half-that?

Once, I jokingly asked a PCV if she had explained to her community that I’m Asian, my humor masking my frustration and discomfort. She reassured me that she had several times over that past week. To my dismay, the first thing her host mom said to her before even addressing me was, “Is she Thai?” Followed by an immediate, “I love her.” The awkwardness and alarm I could feel rolling off my friend was palpable, but she didn’t miss a beat. Responding with, “I’ve already told you she’s American,” a statement she had to repeat numerous times at her school as well.

Or another time when visiting a PCV for her camp, we were walking around her community when someone stopped her to ask about her day. It took them a solid minute before noticing me and asking her who I was. The Thai person vehemently proclaimed I was Chinese. Before I could launch into my little speech, broken but well practiced, my friend exclaimed, “No. She’s American. Just like me.” Their advocacy and friendship in those moments were like a balm to the small lashes that strike me every time Thai people question my identity and validity as an American.

So to Mary and Lexi, my Trang girls, thank you for your friendship and thoughtfulness. No words can explain the feeling of inclusion when I have struggled to find my place in both America and Vietnam. In my twenty odd years of life, I have never felt fully a part of any community I’ve been in. Not deep down where that insecure girl still lives, questioning herself and who she is. Thank you for understanding this and for making me feel a little less “other.” 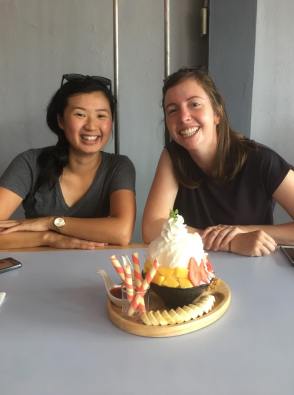 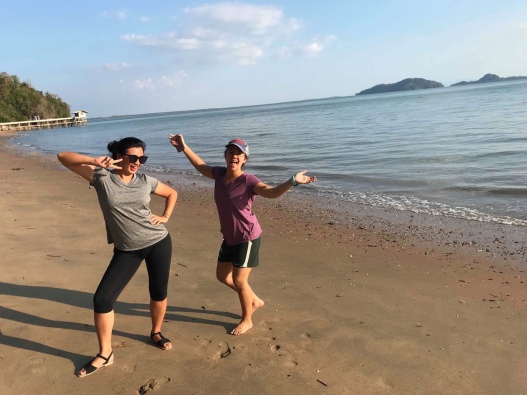