During Group 130’s Reconnect Conference in 2018 many of us decided on getting tattoos. Prior to that week I had also heard of volunteers from Group 129 who had gotten tattooed during their service. I’ve always loved tattoos because they can be spontaneous or well thought out, hold meaning to someone, and are essentially permanent works of art that people commit to on their bodies. The particular time and place in one’s life that someone decides to get a tattoo also intrigues me, and I believe that tattoos can help preserve your memory of where you were when you got it. So upon finally getting my wave tattoo in Kanchanaburi, I was very curious to hear the stories behind some of the tattoos that other volunteers had gotten while in Thailand, and if and how the tattoos connected to their service as Peace Corps volunteers. After hearing many stories we’ve decided to start a series featuring PCVs and their tattoo stories.

1. Describe your tattoo, and give a brief story about when and where (in Thailand) you got it.

It’s a heart with a ripple of water inside of it on my left rib cage. I got it done at BT Tattoo Studio in BKK- they did a great job, and I would definitely recommend them!

2. What is the meaning of your tattoo, if any, and does it connect you to your Peace Corps Service?

My tattoo is a depiction of the Thai concept of naam jaai (water heart), or giving generously without the expectation of receiving anything in return. It connects to my service in a couple of different ways. The first is, obviously, the concept itself. The generosity I have experienced in Thailand, not only from my community members but also from fellow volunteers, Peace Corps staff, and the people who I’ve encountered while traveling, is never- ending and unlike anywhere else I’ve been to before. I think it has turned me into a more generous person. My tattoo was also drawn by a close PCV friend- Cat Nightengale. Cat and I have been friends since PST and I really admire her artwork so, in January, I explained my idea and asked if she would help me out. Not surprisingly, I love what she came up with and was excited to finally get it tattooed 8 months later!

3. What inspired you to get it, and do you think that if you weren’t a Peace Corps volunteer, you would have still gotten it?

I knew that I wanted to get a Peace Corps tattoo but I didn’t just want a Thai word or 129 somewhere. I went back and forth between ideas that were specific to my cohort, my province, and my site before deciding that naam jaai encompassed every part of my service. Cat drew the image in January, and in September I had the extra baht and was in Bangkok for a weekend, so I decided it was the best time to get it! I definitely would not have gotten it if I weren’t a PCV. 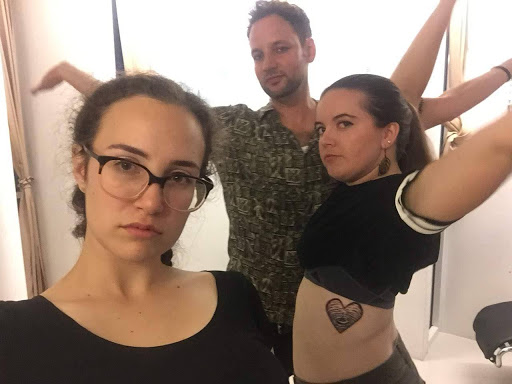 1. Describe your tattoo, and give a brief story about when and where (in Thailand,) you got it done.

I got my tattoo done in Bangkok in October when my friend from America was visiting me. The tattoo is supposed to be a little Buddhist symbol for kindness.

2. What is the meaning of your tattoo, if any, and does it connect you to your peace corps service?

My friend and I already have one matching tattoo representing our time in Australia, and we thought it would be cool to get a matching tattoo in every country we visit together!

3. What inspired you to get it, and do you think that if you weren’t a peace corps volunteer, you would have still gotten it?

My friend’s visit was the inspiration! If I was not in PC Thailand I probably wouldn’t have gotten it, unless I happened to travel here with her.

1. Describe your tattoo, and give a brief story about when and where (in Thailand,) you got it done.

The first tattoo I got in Thailand, (I say first because I am determined to get more,) is a Sak Yant: the traditional Thai style tattoo. It’s my largest tattoo to date, covering the upper portion of my back, and consists of 4 different blessings. And it was one of the most physically painful experiences I’ve ever had.

2. What is the meaning of your tattoo, if any, and does it connect you to your peace corps service?

A group of PCVs were in Bangkok for various Peace Corps related meetings and one person was getting her first tattoo. I joked about getting one with her but then the idea got stuck in my head, so I reached out to the tattoo parlor to see if they could take a walk in that day. They said that they could so I sent them over the design that I had picked out. I knew that I wanted to get a Sak Yant eventually, but I wasn’t expecting to get one that day so I picked my design just minutes before sending it. That particular tattoo parlor allows you to pick the method of tattooing; machine or by hand. I chose to have my tattoo done in the traditional fashion.

Looking back I’m happy that I have this cool story, but the minute the Arjaan, (Arjaan’s are people who have been trained to do Sak Yants but who are not Monks,) started hammering away at my back with a 2 foot long needle I instantly wished that he was using a machine. The tattooing process lasted 6 hours and the pain was difficult to endure for that long. The traditional tattooing method feels worse than what I was used to, and after hour 4 I felt as if the pain intensified and I was ready to be done with it. I put on a comedy podcast to try and take my mind off of it… and it didn’t work. I was the last person in the shop when the artist finally finished the piece, and all the other artists in the shop cheered. I don’t know if it was for me or because they were happy that they could finally close up the shop and go home.

But before I left for a night of dancing and Krispy Kremes, the Arjaan and I prayed together for 15 minutes. There were a couple of parts to this post-tattoo ritual: I had water splashed on me, we held a tribute of some kind, he blew cool air on my back, and a few other things that I don’t understand. The part of the prayer that felt most impactful to me was when the Arjaan stuck golden papers over each of the 4 blessings; the way you would to a statue of Buddha at a temple. When I saw my tattoo being treated with the equal level of respect given to a holy symbol, I knew that I had something special.

3. What inspired you to get it, and do you think that if you weren’t a peace corps volunteer, you would have still gotten it?

There are 4 different parts to this tattoo, each with their own attributed meanings. But to summarize, they offer protection and good fortune to different areas of my life. The names of the four blessings are Ha Taew, Chat Petch, Gao Yord and Paed Tidt. There are three things that inspired me to get this tattoo. One was the allure of the story. I loved the process of getting this tattoo through and through, even the incredibly painful parts. It was a unique opportunity that I didn’t want to pass up. Two was that my grandfather, a role model of mine, was decorated with tattoos all over his body. I love tattoos because they remind me of him, and I hope to keep getting more as I get older. And Finally, I think Sak Yants are absolutely breathtaking. They are so intricate and done completely from memory. If I wasn’t a Peace Corps volunteer, but I happened to be in Thailand, I would absolutely still have gotten this tattoo. I want to get more on the lower back before I go back as well, but I need to save for it first, as well as summon up some more courage before I can face that needle again.