Don’t Panic When a 6-Foot Snake Enters Your Home

Panic is a sudden overwhelming fear that produces irrational behavior, and that often spreads quickly through a group of persons or animals.

The word Panic is derived from the Greek god Pan. He was the god of the woods who caused contagious, unreasoning fear to travelers.

Well, I experienced such a fear.

It was the weekend before Pre-Connect. I walked out the front double doors of our home and placed two pitchers on the dining table of our porch.

Be it a sunny day in the middle of July, I left one door open and closed the screen to let in some fresh air. I finished filling up one pitcher from the water jug and moved on to the next. As it was halfway full, I saw the back half of a grayish, green snake crawl in between the other front door and the screen.

I stopped pouring immediately, walked towards the front door, and started yelling at the snake: “Aye! No! Stop!”

I called Pet, our dog, to come and help as the snake crawled up and alongside the door hinges, but Pet didn’t budge from his nap. I grabbed a broom and started wailing at the serpent! In my panic, I accidentally opened the screen door.

The snake, seeking survival, slithers into our house.

I shouted to Day who was upstairs. She walks a few steps down and sees the snake crawl under a bookshelf. Then, she starts yelling too. It comes out from underneath. I swing at him trying to sweep it back towards the door. I swing and run back. Swing and run back. Nothing doing. Then, he crawls behind a cabinet of dishes.

Pet finally comes and sees my panic. My fear spreads to him and, then, Pet starts barking uncontrollably. I wanted to continue the pursuit of the snake, but Day’s counsel advised against it. She brought up that it could be poisonous. Maybe not. Either way, it for sure wasn’t worth finding out.

We call our host mother and she sends the PE teacher from the school to check things out. He enters fearlessly and starts looking under and inside the cabinets with a flashlight trying to spot him. He doesn’t see anything after his inspection and he concludes that the snake crawled into the washroom and left the house. Pet continued barking long after our heart rates returned to normal.

We forgot about it and hoped that after Reconnect we could act like it never happened.

Looking back, if I had gently guided the snake out, I wouldn’t have accidently opened the screen door nor would he have came into our house to escape imminent danger. Now that I think about it, he was more afraid of me than I was of him.

Therefore, do not spread fear to every creature around you when you see a snake slithering into your door or your window or wherever. Calmly guide the snake and say, “Come on, buddy. This way.”

Or call a reliable community member. Yeah, that’s probably a better idea. But be calm.

It’s been two weeks since Reconnect and we’ve forgotten all about the thing that creepeth. That is, until this past weekend. While doing laundry, we saw this in the washroom: 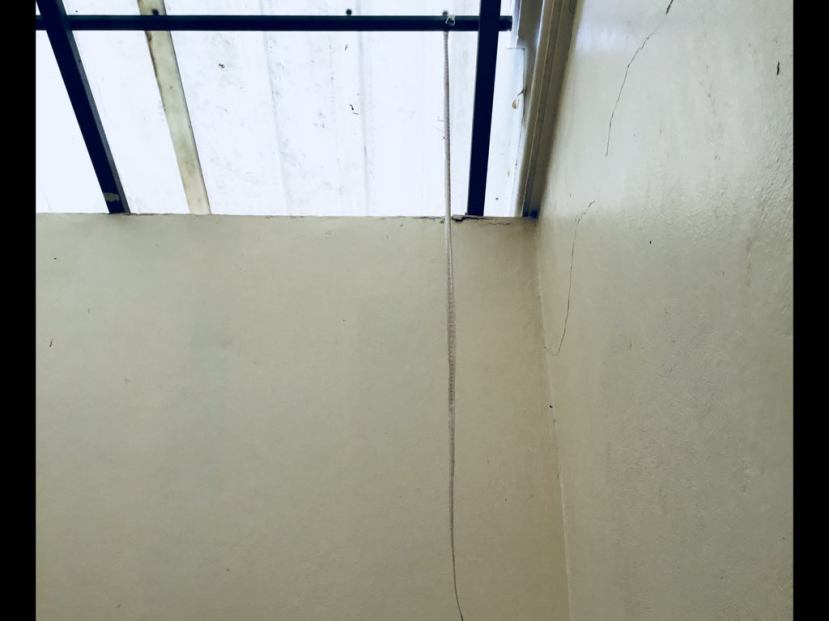 Was he just looking for a safe place to shed his skin? Maybe. But here’s the real question: Where is he now?