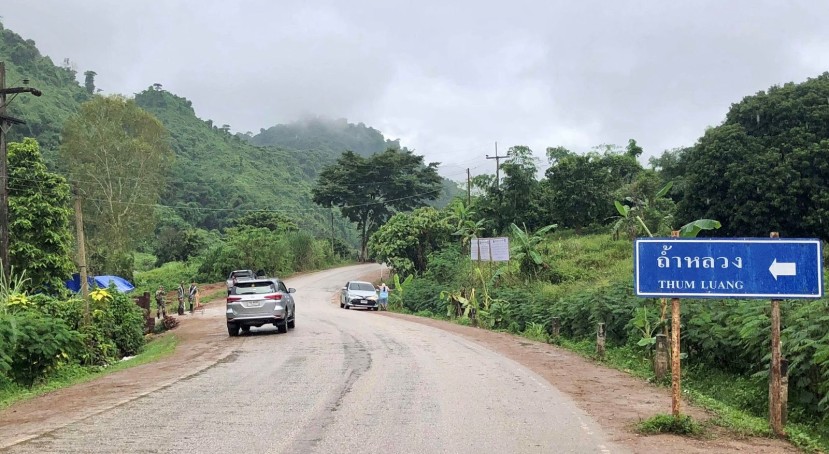 Guards and Thai tourists outside the cave’s entrance

It was in a van, while on a trip to Nan with my school’s teachers, where I first heard the news that the, now infamous, boys were missing. My co-teacher showed me a blurry picture of the team and said, “missing.” I asked, “which one?” She said, “all of them.” Out of fear of what she would say I muttered, “are they our students?” She said, “no, the neighboring school’s students.” At that moment, I didn’t know what to feel. I was relieved to know that they weren’t my students but struck with horror that my community had this tragedy occur.

I decided to turn to Google for the rest of my questions, instead of us trying to translate back and forth in this irregular situation that neither of us would have the vocabulary for. This is when I learned the boys had gone missing in Tham Luang, a cave located a mere 3 kilometers from my new home. I biked to Nam Nang Non National Park (where the cave is located) regularly; it was my place to escape to when I heard the mountains calling. I was in shock, that this gorgeous haven of mine could have betrayed me and my community in such a ghastly manner. 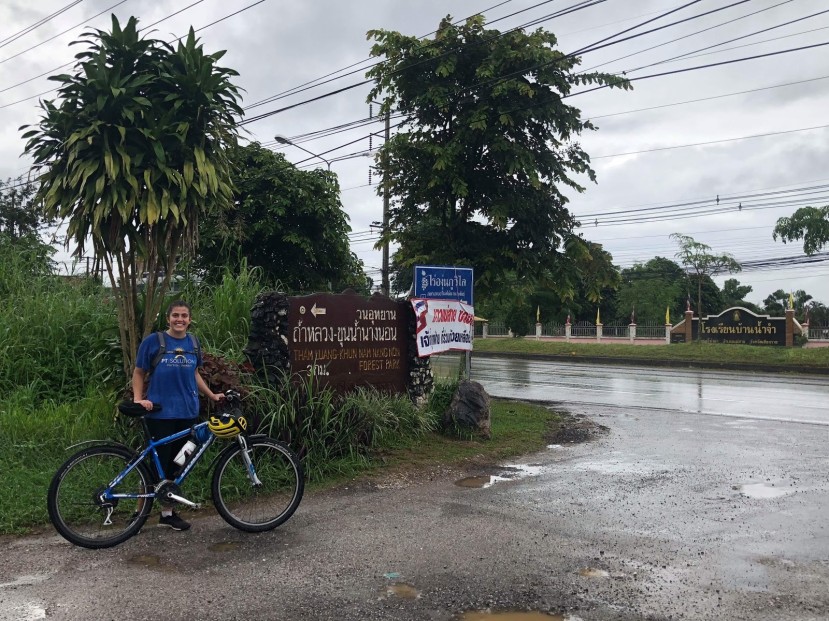 I spent the next few weeks constantly checking for updates whenever I had the chance. My host family, and everyone in my community, had their TV turned onto the news 24/7. It was all anyone could talk about. All around the community, I felt this heavy layer of sorrow squishing us beneath it as we attempted to go about our normal lives. But nothing about those few weeks was normal.

On that first Monday back at school, myself, my Paw Aw (principal) and a few of my school’s teachers went to visit the boys’ school and pay our respects to their staff. However, as most things are in Thailand, I wasn’t told we were going until we were on our way there. It being less than a five-minute drive away, left me with little time to think about what I would say. During the car ride over, all I could think about was how I didn’t have the Thai language skills for this situation. I then realized, I didn’t have the English skills for it either. I made the decision that I would just be silent and follow my co-teacher’s lead, who would surely know the right way to act in Thai culture. However, we got there and I was shocked. The school had classes going on as if nothing had happened. All my school staff did was give the other school’s staff money, take a photo (nothing happens in Thailand without a photo), and leave. I guess no one knew what to do in this situation. After all, how many times has this happened before?

I started to realize how little people here knew how to deal with this situation. Many members of the community would ask me if I knew the news and would chuckle when I said I did and I was very sad. This threw me for a loop. How could they possibly be laughing at this conversation?! This kept happening to me, so I decided to talk to some fellow volunteers about it. They helped me see that it was likely a combination of the fact that my community members were shocked I was aware of what was happening, and that Thai people have a culture strongly rooted in “saving face.” Thus, publicly showing sadness doesn’t really fall into their cultural norms. Thai people instead, reacted by praying and making religious offerings in the boys’ honor.

Offerings outside the now closed off cave

My host family was also in a unique situation during this time because my host mom and aunt work for our local government. Normally when I come home after school, my host aunt would be waiting for me to go for a walk and get dinner. During these tumultuous three weeks, she was nowhere to be found. When I asked my Yai (grandmother) where she was I was informed she was at the cave offering help to the rescue workers in any way she could. I didn’t see her much at all during those weeks and, when I did, she was exhausted. This made me so proud to be a part of her family. She might not have been a diver, but she was there every day helping in any way she could. That, to me, was awe inspiring! 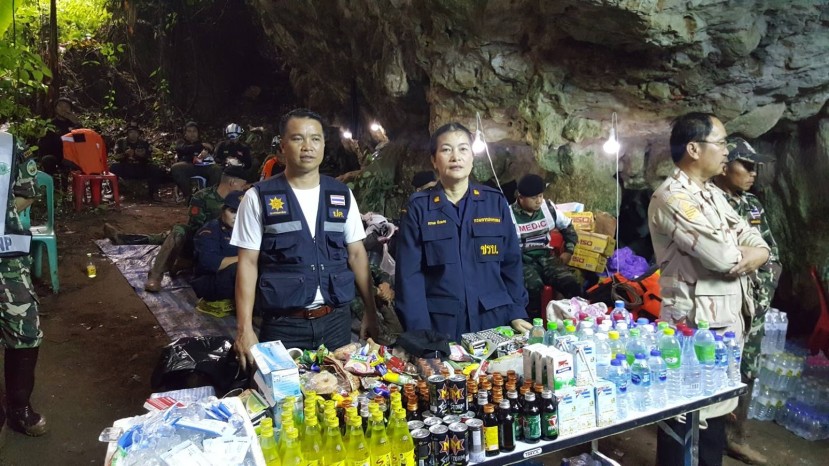 My host aunt in the cave manning the supply table

A few days after the search began, I went into our school cafeteria for lunch to find tents set up in there. At first, I thought this was related to some scout day activity (scout’s day is a weekly occurrence at schools in Thailand) but I then realized there were men wearing orange vests with radios. I got confirmation from another teacher that these were indeed rescue workers who had set up camp in our cafeteria. I seemed to be the only one who noticed them too because everyone else, including the students, treated it as normal! One thing during this time that warmed my heart was the students eating lunch after the rescue workers had finished theirs. One of the rescue workers got up and walked randomly around the cafeteria giving out leftover snacks to our students. To me, this showed that this brave man who was sacrificing his time to help the 13 boys stuck in the cave, clearly had a large heart and love for children.

The tents set up at the front of our cafeteria

The day they found the boys and their coach alive, was one of the best days I have had at site. I woke up that morning to the news then I walked out to see my Yai (grandmother) and Dtaa (grandfather) so that we could cheer together. I went to school and it was all we could talk about. We were happy the entire day. Part of me expected there to be parades in the street and school to be canceled, but that was naïve, seeing as although they were alive they were still trapped. I kept watching and waiting for the rescue workers stationed at my school to get up in a hurry and rush off to the cave, but they never did. Later that day, we learned how difficult it was going to be to get the boys out. Over the next few days there was talk that it could take months, and this news felt like a slap in the face. Not only because of the struggle the boys would have to endure, but the fact that they may lose the media’s attention over time. In my mind, once the media’s attention was lost, the money would dry up and the rescue workers wouldn’t have the proper funds and equipment to get the boys out safely. Despite all this talk, we kept seeing helicopters fly over, carrying large material, which meant they weren’t giving up yet.

The workstation the rescue workers left behind at my school, it is still there today

Every day I woke up and it wasn’t raining, I was happy and every time it began to rain, I was sad. Despite my love for how the rain here helps cool things off, I knew rain was the enemy of the rescue efforts. During my constant search for news updates, I read that they were looking for ways to drill into the cave from above. I then went out to lunch with my co-teacher and sure enough we spotted little orange dots on top of the mountain (I assumed these were rescue workers and/or equipment). Then, I went on to read that Elon Musk was offering help. To my tiny community? Elon Musk? This was shocking. My tiny community hidden in the mountains of northern Thailand had reached international news and somehow made it to Mr. Musk’s desk. WOW! As another volunteer put it, “how cool is it that your site is getting international attention?” This perplexed me because how often in the Peace Corps do people recognize the location of your site? Almost never! So yes, this was cool, but I still would have preferred for this not to have happened for the sake of the boys and the one rescuer who sacrificed his life for the cause.

Unfortunately, I had to leave for ten days to go to our Peace Corps reconnect training. I felt incredibly hard to leave my community amid this turmoil, but I had to. Thankfully, while I was gone the boys were rescued safely and taken to the hospital. I returned home on the day they would be released from the hospital and finally get to go home. Watching their interview on the news with them smiling and laughing was incredible. These boys were going to be alright, which meant my community would be too.

Recently, I had an RPCV from The Gambia visit me. I, of course, wanted to show her my favorite bike ride. I had no idea how far we would be able to make it; would the roads still be blocked or would they be totally open? We ended up going right up to the bottom of the steps at the cave’s entrance where we were met by a dozen guards who let us go up to the fence and take some photos. This no longer looked like the same place I once came to for an escape. The once green luscious grass fields were now dreary gravel. The serene feeling the park once held was replaced with an air of gloom. The once deserted fields were now filled with soldiers and wandering eyes.

The entrance to the cave that has become a guard station

Thankfully, the cave is closed and the story almost had a happy ending. The 13 boys who were trapped are healthy and our community is honoring the lost rescuer with a giant mural that will soon be completed. The dust is settling as events become normal again accompanied by conversations not entirely about the events at the cave. It will be interesting to see what lasting impact this tragic event has over the remainder of my service here. Stay tuned! 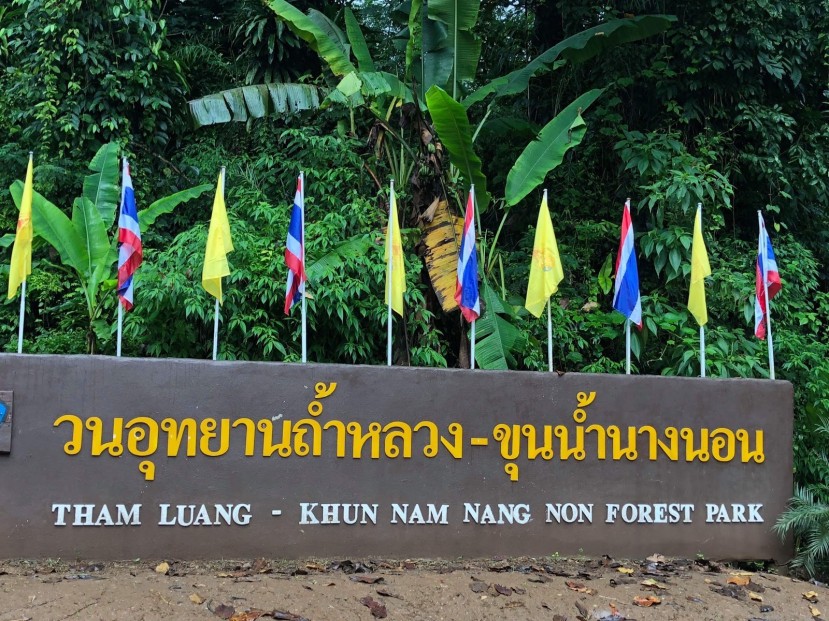 The cave entrance now, notice all the grass is gone