The Ghost of Satun

I had my first encounter with the supernatural on a sunny March morning. Things were far from unusual. I woke up around 6 o’clock in the morning to begin my daily attempt at early morning exercise – which per usual became a quick nap on my yoga mat before I moved on to the most important meal of the day. I whipped up a bowl of oatmeal topped with bananas, which I brought to the front porch, for my daily dose of people watching. My house is situated on the largest road in Satun, which, surprisingly,  resembles the country backroads of Indiana. But compared to the cozy paths that wind through the rest of my community, this road sounds like the autobahn as dozens of motorcycles and semis fly by. Every morning, I sit on my front porch and marvel at Thai people’s creativity in transporting large numbers of people or cargo via motorcycle. The most impressive feat I’ve witnessed thus far was carried out by two young girls riding a motorcycle while carrying two enormous banana trees. The girl in the back had one tree in each hand and rested the base of each tree on each foot, creating the illusion of two giant pig tails.

Main road in front of my house vs one of the many back roads through my community.

A digress, back to my typical morning. As I slurped down my oatmeal and giggled at the passersby, I pulled out my phone and opened up my email, like the young professional I am. My inbox  was riddled with promotions, news articles and one very familiar, but highly unexpected name — Theresa Kozelka. Now often times I do email myself reminders or articles; however, on this particular day, I did no such thing. As a matter of fact, that day I boldly chose to leave my cell phone behind as I joined a friend and her husband for a trip and spent a majority of the day perched on a tiny shrimping boat. Needless to say, this email came as quite a shock. I began to investigate further and found that the email contained a PowerPoint presentation, which my host dad had texted me earlier that weekend. Who (or what!) had not only accessed my email but also found a presentation that had previously only existed in my text messages?

Later that day, I found myself planning for events that were months in the future. It was summer break so things were especially slow in the office. As I browsed my Google Docs, wading through lesson plans and camp schedules, I noticed something strange. The last two opened documents were: “Christmas Songs” and “Songs You Know.” Two files deep in the Peace Corps Thailand archives, that I honestly had never seen before.

Now, I know what you’re thinking: someone hacked my email account and that person was responsible for both the aforementioned email and the songs. At the time, I too believed it was a hacker. But then things got weirder.

A few days later, I was looking around my kitchen (better known as the area in the back of my house that is home to a bookshelf full of cooking oils, oatmeal and an electric grill) for my knife. I only have one knife in my house and this knife is very hard to miss. If you’re imagining a simple butter knife, stop right there. My knife is better described as a butcher’s knife. I use this butcher’s knife to cut mangoes, spread peanut butter, open packages, etc. This butcher’s knife has become quite the jack of all trades, and quite frankly one of my best friends. As I roamed through my kitchen looking for said knife, I realized it was nowhere to be found. So, like a resilient Peace Corps Volunteer, I substituted a pair of scissors for the knife and carried on with my day. Later that night, however, as I sat on my kitchen floor pouring myself a glass of water out of the corner of my eye I saw a glimmer of silver coming from the shelf below the electric grill. My butcher’s knife had made its way under my grill and by who or what I could not say!

Then the very next night, I was sitting in my living room- chatting with my friend Michael on Facetime. Michael is one of those friends who can make you laugh until you’re crying without even cracking a smile. I was so caught up in his stories that I didn’t notice my hands fidgeting. That is until Michael asked me, “What are you holding?” I looked down and saw in my hands a little silver fish hook. Now I have gone fishing here many times, but never once have I bought fishing gear, owned fishing gear or brought fishing gear back to my house. And yet there I was sitting at my table, in my living room holding a fishing hook!

As I lay on my bed that night listening to the rats pitter patter across the roof, I began to piece together all the clues – the emails, the songs, the knife, the fish hook. It all began to crystallize and quickly became quite obvious. I was being haunted – by a tech-savvy, Christmas song-loving, fisherman ghost!

That night I awoke as usual around 3 AM for my nightly trip to the bathroom. Guarded with my flashlight, I tiptoed across my bedroom floor towards the door, only to be stopped by a very disturbing sight. Every night I lay an old pair of pants across the bottom of my door to prevent any wild life from entering my room. However, on this particular night, that pair of pants was not in its usual position against the base of the door, but rather at a perfect 45 degree angle, suggesting someone— or something!— had entered my room.  Had the ghost come into my room and hovered over me as I slept? Had he found my deck of cards and began a game of solitaire? Had he opened up my google docs and memorized the lyrics to Jingle Bell Rock? The possibilities were endless! 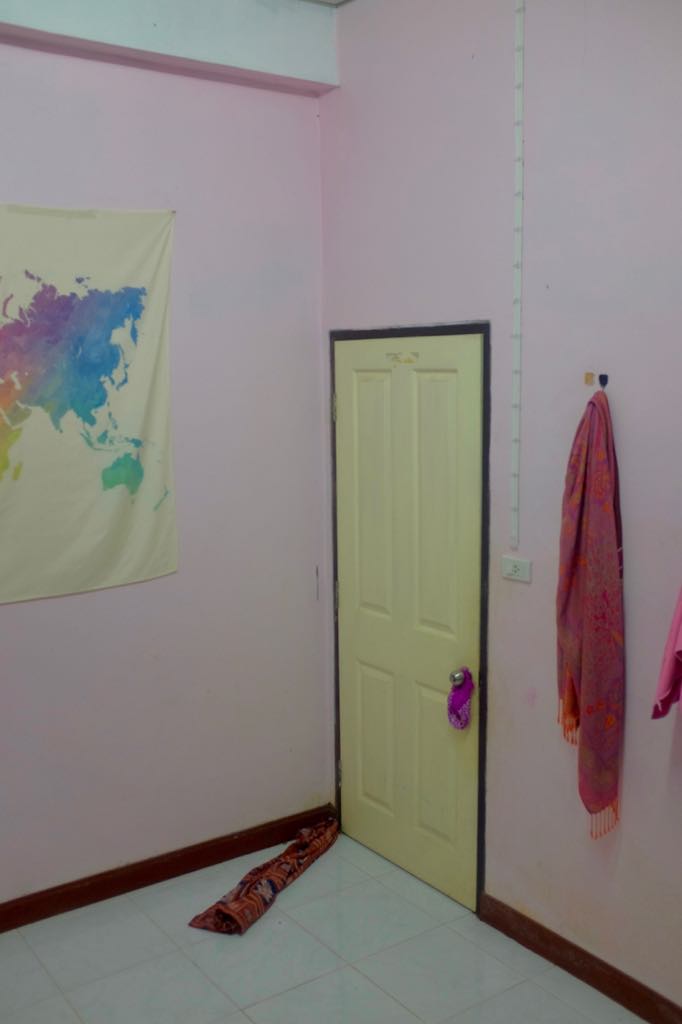 While my encounters with the supernatural seem to be occurring less and less these days, I still keep a close eye on the whereabouts of my knife and the fish hook has earned its own special place on my bookshelf. Maybe one day I’ll meet the ghost, and we can have a little Christmas in July party. Until then, I will hold onto the simple lesson he or she has taught me: We will never fully understand everything (in Thailand or wherever else we may be), but sometimes it’s more fun to stop asking questions and to start using your imagination.

The contents of this article are based entirely on factual events. If you have had any such experiences with the supernatural please do not hesitate to contact Theresa Kozelka at theresa.kozelka@gmail.com.