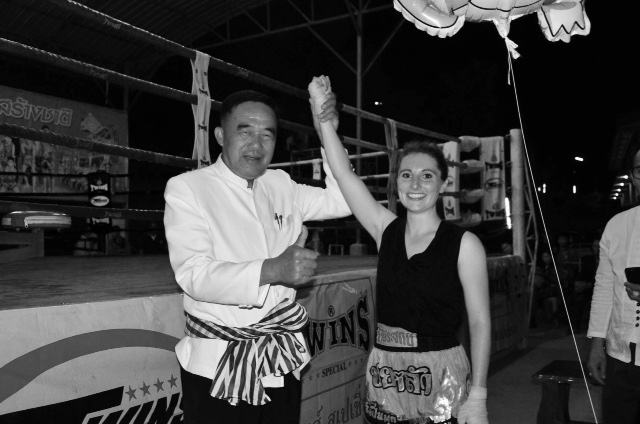 I drew in a deep breath as I knelt down on the mat, pulled my hands into my chest and performed the first bow of my Wai Kru dance. This dance, a Thai boxing tradition, is a way of showing respect to one’s trainers/teachers before the fight begins and is typically specific to the individual. Now you might be wondering how I, a foreigner plopped down in Northeastern Thailand without any previous Muay Thai experience, found myself performing this dance in front of hundreds of Thai spectators. Now, that, is a great question. And if we’re being honest, it is exactly what I was asking myself as I turned to face my opponent that day.

One piece of advice that almost every volunteer would agree with is to ‘just say yes’. Say yes to the lunch invite, say yes to going on a bpai tiao (trip) with your neighbors or, in my case, say yes to the man who asks you if you want to learn Muay Thai. Well, I didn’t really say that three-lettered word. I wanted to say ‘yes definitely’ and ‘hell no’ at the same time. I really wanted to learn but the idea of approaching Muay Thai fighters and trainers (almost all of whom are male) alone with minimal Thai language skills was incredibly terrifying. As I was trying to decide between yes and no, an ‘okay’ suddenly popped out of my mouth.

Before I could register what was happening, my legs had started making their way to the boxing ring. The fighter approached the trainer to explain to him that someone new wanted to learn how to box. The trainer looked at me, then behind me, then to my right and left before asking the fighter about whom he was talking. Safe to say he was not expecting me, a small, foreign girl, to be the one wanting to learn.  My heart was pounding and my head was telling me to just turn around. But I didn’t. My legs ignored those doubts and kept moving forward. I didn’t know it then, but my legs ended up moving me forward into a new phase of my Peace Corps service that day.

I began training with about fifteen other people, six days a week, two hours a day, beginning at around 4:30pm. The first few weeks were so incredibly nerve-wracking that I found my stomach wound up in knots of anxiety at almost exactly 4pm every day. ‘Did they really mean it when they said I should go every day?’, ‘I don’t even understand the vocabulary they use’ , ‘I have no idea what I’m doing’. These doubts would swim around in my head until, like that first day, I would force myself to get my body there trusting that the rest would follow.

I not only had never boxed before, but my inability to fully understand every command made for some painstakingly slow training sessions.  The two nineteen-year old girls with whom I train were definitely wary of my presence. They were partnered up with me and without having any say in the matter had to teach me the basics. Feeling tolerated has strangely been a huge part of my experience here over the past year. I’ve experienced it with my host family, my co-teachers, my schools and co-workers and the only thing that has ever helped break down that barrier is time. Keep showing up, keep being present. So that’s what I did. I showed up every day for practice regardless of the knots that infiltrated my stomach and within a few months went from barely being acknowledged to hearing a loud “HALLOOO ANNAAAA” upon my arrival to the boxing ring.  I had finally found a rhythm: 4pm nerves, show up, nerves subside, train, laugh, go home happy. Of course, it would just be too simple for that to be the end of the story.

In December of 2017, I found myself smiling and nodding ‘yes’ to a stream of questions asked by my trainer. I didn’t know what he was asking but decided to approach it the same way I approached most of the Thai I didn’t understand – by smiling and giving an affirming nod. A little advice: if your 55 year-old Muay Thai trainer/current soldier asks you something you don’t understand, the ‘just say yes’ rule no longer applies. It is not the same as unknowingly agreeing to go to lunch with your counterpart. In fact, you could find yourself agreeing to something as crazy as fighting in your community’s famous yearly festival which, as you’ve guessed by now, is exactly how I found myself standing under that fluorescent light of the boxing ring on January 22nd, 2018. 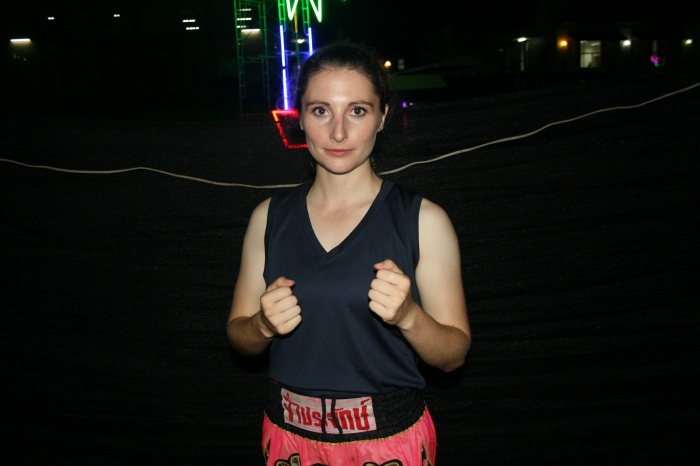 DING DING. The bell rang, snapping me out of my daydream and announcing the end of the first round. I was promptly fed advice, water and good luck by my teammates. Teammates. It’s funny to call them as such when the sport is based on individual fights but as I was sitting there, trying to process everything that was happening around me, I couldn’t deny that the people behind me were exactly that.  The bell rang and with my family of fighters cheering me on, the lights seemed less scary and the crowd seemed less daunting. When the referee raised my arm after the second round to declare my victory, I was overwhelmed with pride and gratitude to be a part of that team. A team that welcomed me, taught me and never treated me like I was special. In that ring, I am no longer the foreigner. I’m just another fighter.