Hi, this is Tom, way up north in Maefahluang, Chaing Rai. I hope everyone had a happy holiday season at your home away from home. This time of year, it can be especially difficult to be separated from our loved ones, so I hope everyone was able to find joy in the season in their own way. I’d also like to extend a warm welcome to all the new arrivals from Group 130. Welcome to Thailand!

I’d like to share a little snapshot of PCV life for me here at site over the holidays. Maefahluang is a very diverse tambon. I live in a Tai-Yai village at the base of Doi Tung, while I work with youth from Lahu, Akha, and Chinese communities on the mountain. This year I was fortunate to find myself in some unique circumstances on Christmas day. This year, Christmas fell on a Monday – I usually spend my Mondays at a small primary school in a Lahu village on the mountain. Almost 100% of the students are Christian, so there was no school. Instead of working with the kids that morning, I found myself helping the teachers install new magnetic whiteboards in the classrooms. I was glad to help with the work, but couldn’t help contemplating about how much of an atypical Christmas this was for me. After a while, a few of us threw in the towel and walked into the village to observe the Christmas festivities taking place. We missed the parade through the village in the morning, but we were able to watch some of the youth sporting events and talent shows that were going on. It was fun to watch, but as noon rolled around we had to get going. Toon Bodyslam was due to run through our tambon at the base of the mountain on the final leg of his 55-day charity run across Thailand. We had been receiving updates about his progress and location throughout the morning. When we heard he was about an hour away from us we piled into the car and headed down the mountain.

I’m pretty sure almost everyone living in Thailand has heard about the Thai rock star Artiwara, “Toon,” Khongmalai, singer for the popular Thai rock band, “Bodyslam”, and his recent cross-country charity run. The purpose of the run was to raise money for public hospitals across the country that serve the poor. He started the journey on November 1st at the Thai-Malay border. The 55-day 2,200 km run was set to end on Christmas day in northern Thailand at the border town of Maesai, Chiang Rai. Maesai is only a few kilometers beyond my tambon, where Toon and his entourage were due to come parading through at any moment!

We arrived at the main stretch of highway that passes through Maefahluang on route to Maesai. A sizeable crowd was already waiting, but as the minutes ticked by awaiting Toon’s arrival the street began to flood with people. Truckloads of students and hundreds of people from the nearby villages began filling the sidewalks on this short stretch of highway. Throngs of people now occupied the area and it was quite a spectacle to behold. There were cheers all around when the first members of Toon’s running party began to appear and trickle past. Leading the procession was a man on a motorcycle in full Spiderman get-up waving a huge Thai flag. Next came some classic cars, a lot of security, and a few groups of support runners. When Toon finally passed by there was little that the security teams could do to keep everyone back. People were in a frenzy. Many were just trying to snap a picture, while some made bold attempts to get a selfie with the star. Others ran forward with fists full of baht, eager to donate cash to one of the many official volunteers surrounding Toon with collection bags. Some people even created elaborate money necklaces out of every denomination of baht and came forward to adorn Toon with their donation. 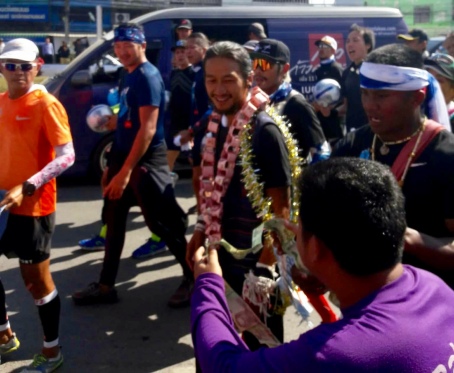 Within a matter of minutes, it was over. The procession of runners and security thinned out and the horde began to disperse. Later that night, we would see Toon on the national news at the finish line in familiar Maesai, just down the road. I walked through the waning crowd to meet back up with my group, knowing we would be going to grab a bite to eat. As I walked, I continued to bump into people I knew from all over the community. I would ask them what they thought about Toon and this big ordeal. The answer I routinely received was that he is a genuine hero. I could tell that this was really something special by the way it brought my whole community together in a display of pride, unity, and giving. Moreover, what was so impressive is that this unifying spirit of goodwill had already made its way across the entire country. In an amazing display of generosity on the part of the Thai people, Toon far surpassed his fundraising goal for this event and donations are still coming in. Although it was not what I would consider a traditional Christmas in any sense, I wouldn’t trade it for anything. It was great to witness the spectacle of Toon’s charity run but even greater to catch a glimpse into the hearts of the Thai people and briefly feel like I was a part of it all.