Something that still sticks out from our Staging (which seems like a hundred years ago) was this idea of a single story. We watched a video of a TED Talk by Novelist Chimamanda Ngozi Adichie, in which she warns about the critical misunderstandings that can happen between cultures if we adhere to a singular story, fact, or narrative about that culture.

Last year at a hostel in Sukhothai I sat talking to a German woman who was traveling through Thailand on vacation. She started telling me about how Thai people are so much more in touch with their spirituality, so much more woke, so much more enlightened because of their belief in Buddhism. At the time, all I could do was stifle a laugh and try really hard not to say, “That’s racist BS, and you have no idea what you’re talking about.” She was not the first or last white foreigner to express such a view to me.

Westerners love to mysticize and romanticize the “Far East.” The medicine, the religion, the tradition, the wisdom. There is a lot of value in those things, but let’s not let ourselves believe the single story that tourists and other foreigners tell themselves about places like Thailand – that what is aspirational is a widely shared absolute.

I’ve seen monks smoking cigarettes, playing games on their phone during ceremonies, and falling asleep up on the stage. I’ve seen teenagers with face tattoos doing wheelies on their motorcycles, and school principals meeting out corporal punishment to seven-year-olds with their bare hands. The golden statue of the Buddha sitting serenely in the back of the room, and his messages of enlightenment through suffering, kindness as a virtue, and the impermanence of all things seems a distant ideal in those moments.

If there’s anything that I have learned from living here it’s that Thai people are just people. Flawed, imperfect people searching for meaning and purpose just like every other human on the planet.

Thais have a lot of strengths that we don’t have, and vice versa. The rituals they practice have meaning in religious practice – they are not the religion. I find great comfort in them, but often the solemnity of these rituals are overshadowed by the apparent need for them to go well, or to look good. I think we tend to romanticize them because they’re so different than ours, but to many Thais, these rituals are routine obligations that are part of their daily life, like going to church on Sunday for many Westerners. 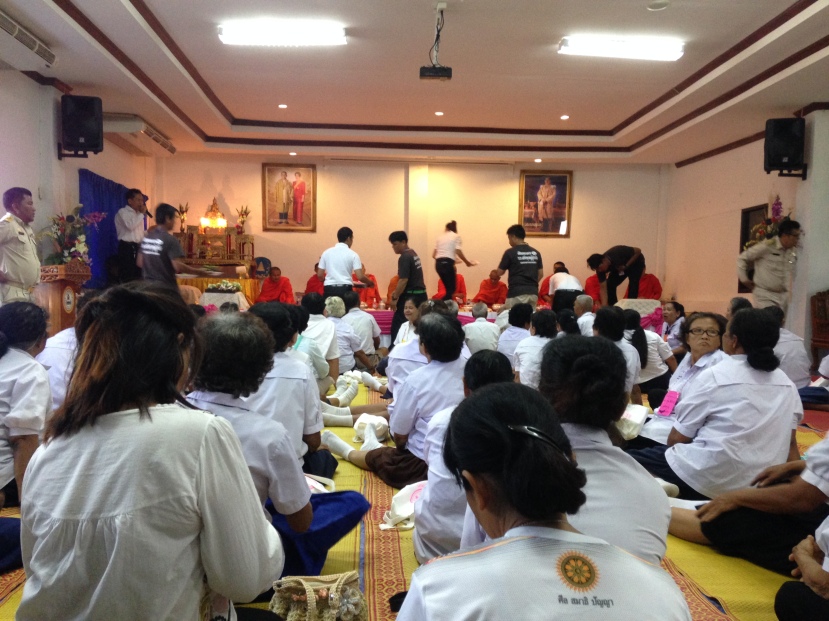 I’m sitting cross-legged on the floor of the meeting room with a few dozen others. At the front of the room on the small stage are eight sitting figures wrapped in various shades of orange linen all lined up in a row. They all hold a single piece of string clasped between the thumb and index finger of their hands with their palms pressed together.

They are chanting in the way that monks often do. The Theravada Buddhist monk chanting has a very recognizable rhythm to it. Lots of vowel sounds, a droning monotone punctuated by a few fluctuations, the collective voices of the monks filling the space. I find it incredibly comforting. Sometimes the other people in the room will repeat after them, but I gave up on trying to do that a long time ago so I just listen.

There are points within the chant where the lead monk will stop chanting while the others keep going. At one point during the ritual, I notice that when the lead monk stops chanting and the ambient volume goes down I can hear the chatter of multiple voices speaking at once. It becomes obvious that many people in the room have stopped paying attention and are just talking to one another. On top of that, the organizers of this little event are busying themselves preparing food for the monks to eat and making not a small amount of noise doing it.

One of my Thai friends once told me that although she likes Buddhism, she really hates all the rituals that come with it. All I could think at the time was, “Isn’t that most of Buddhism?” Her view makes more sense the more I am exposed to the rituals. It’s almost as if maintaining the ritual of the ritual is interfering with the solemnity of the ritual itself. The ritual being carried out perfectly and, most importantly, looking good, becomes the priority.

As if to emphasize this point, about ten minutes later someone comes over to me and tells me to go sit in front for the group meditation. It soon becomes clear to me that the primary purpose for this is to take photos of me sitting there looking serene and calm. I sit there, legs folded, eyes closed, trying really hard to focus on my breathing while I hear camera shutters snap open and shut repeatedly around me.

As all volunteers know, Buddhism is a big part of the school day. Nation, Religion, and Monarchy are the three pillars of Thailand’s intrinsic national values.

At my Tuesday morning school, I get the opportunity to sit in meditation with my students after lunch. Cheesy music blares over the PA system to notify the students that it’s time to gather in the auditorium, sit in rows, and prepare to seek enlightenment — participation is not optional. The oldest students become the leaders in this daily ritual, making sure kids are seated and ready for the music to end and for the warbly, probably decades-old guided meditation tape to start playing.

Some days, this task is rather hard to accomplish. Students won’t stay seated. They won’t stay in their lines. They won’t come into the auditorium. They hit, run, wrestle, and yell – they do what kids do. The metaphor of herding cats doesn’t quite capture the chaos. I once saw an older student perform a leg sweep takedown on one of the first-grade students who refused to sit down.

Near the end of this circus, a few teachers wander in at their leisure to observe and make sure students are properly seated, but they do not participate in the ritual. I take my own seat at the end of the last row. Eventually, the tape starts playing and the room falls relatively silent. I close my eyes and focus on the breath. Inhale, exhale, repeat.

After a few minutes, I sense a commotion off to my left near the center of the room. My curiosity gets the best of me and I open my eyes and turn to see what’s happening. One of the teachers who is standing near the back of the rows of meditating children is scolding a child for not being quiet enough, for not meditating the way they’re supposed to. She leans down and smacks him on top of the head and tells him to be quiet, close his eyes, and meditate like a good boy. After this little interaction, she immediately turns back to the other teacher standing next to her and continues her conversation at full volume.

Many Thais I know would not see the irony in this story. Effects and their causes are not quite as transparent. That teacher apparently didn’t see, or didn’t care, that asking someone to show respect to a ritual without demonstrating respect for it yourself communicates mixed messages.

Just like the chanting monks, the solemnity of the ritual is muddled by the need to conduct it, and what ends up coming through looks more like apathy and indifference for the ritual’s purpose.

Sometimes the point of a single story is that others want to believe it, and want us to believe it. The image they project is the one that they want to become the truth, the reality. As volunteers, we have the unique opportunity to see what lies beyond that single story, and to see that there is so much value in the whole story, in the multitude, and not just what German tourists want to believe about Thailand.

The rituals may be boring obligations, but they do have value. They help cultivate patience, serenity and focus among chaos. They provide a sense of stability and comfort in a place that often lacks both. They allow people to feel connected to one another, and to everyone who has ever knelt in front of an altar seeking answers to the questions that burn in their heart.

The principles of Buddhism are aspirational and the rituals are meant to facilitate the path to enlightenment – they are part of the practice, and it takes practice. To the German tourist, it seemed that seeing 40 participants in a ritual was the same as seeing 40 enlightened persons, which would be impressive if that single story were the whole story. But like religious practitioners everywhere, the participants are at varying points along their path of spirituality and enlightenment and the degrees to which their behavior conforms to their religious principles.

The whole story is a more complicated one, but so much more valuable.