Voices presented by PSDN (Peer Support Diversity Network) is a series of video and written interviews highlighting the intersection between PCVs and RPCVs of diverse ethnic/cultural backgrounds and their service in Thailand. These stories will highlight the joys, and the challenges these volunteers face with the hope that they will educate and inspire those who wish to learn more about life in Thailand, as well as, those who may be considering serving in the Peace Corps. 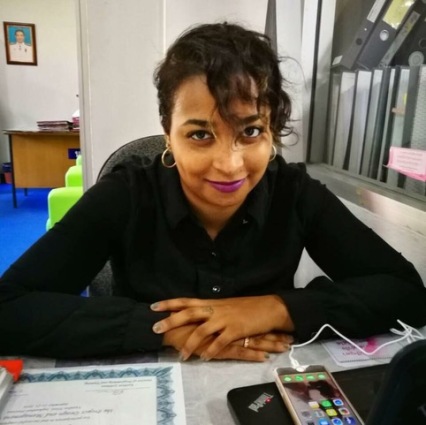 How do you identify yourself?

Where are you now?

I am currently in Chiang Mai, Thailand

Tell us a bit about your host country (fun facts, sites, your favorite things, food, etc.)

Thailand is a beautiful country; it’s known as “The Land of Smiles”. Through the “sabaai” (laid back) lifestyle, the generosity extended towards others and the practice of Buddhism (which is followed by more than 90% of the country’s population), Thailand can easily make you become a more humble and patient person. The national language is Thai, but I live in the northern part of Thailand where they also speak in dialects from the ancient traditions of the Lanna Kingdom.

How long will you be there?

My service is 27 months and I currently have 6 months left.

How did your community first receive you?

The first people I met in my community were my host family and it was an awkward welcoming. The vibes were off. They did not seem too thrilled to have me. Although, already knowing the basics about me (where I came from, why I am here, etc.), they still questioned, not once, but twice if I was indeed an American. Mind you, this is a family that has been hosting American students from a Michigan college for years. The reason for their surprised reaction was answered when I walked into the living room and saw the pictures of every student that had come from America—they were all Caucasian. During my time in their home, they set a schedule for me to have breakfast and dinner, but the only time I ever saw the host father sit down for dinner was when their former exchange student came to visit. Let’s just say when I left the house my picture probably never made it into a frame. Outside of that household, however, —while everyone was still curious of my race and where I came from—I was embraced with warm welcomes, and asked for clarity but wasn’t interrogated about my identity, as if asking me repeatedly was going to change my mind, my race, or where I came from. However, I began to notice that most people did not ask me what my race is, they assumed that I was Indian based off my features; I know this because 90% of the time the people who have the courage to talk to me (whether in Thai or English) assume and say,  “Oh I thought you were from India,” after I’ve corrected them. Day by day the word was getting around that I was the American within the village and that I am a native English speaker. So as I was meeting people they were excited to meet me as well (regardless of my identity) and they were willing to learn from me as I was opened to integrating with my new community.

I was invited by the US General Consulate to attend an American Dance Show along with some of my students.

What do people think you are?

They normally think I am Indian from India or a mixed race Black woman.

What do they think of people of your race?

I was told that my skin complexion was not good (too brown), I’ve been told to use lightening soap when I shower, I have been told that people with my skin complexion are considered bad and we were called “Negro” (yes, even in Thailand where at least 50% of the population appears to be as brown as I am); and I have not met anyone yet that knows anything about Caribbean people.

Has this impacted integration?

Due to my skin complexion and my visible disability (I wear hearing aids in both ears) people are more hesitant to speak to me first. I am an introvert and it has always been uncomfortable for me to step out of my corner and mingle first. I’m sure there were conversations missed, knowledge not shared and spaces left feeling uncomfortable, but I feel that when I had the courage to break the ice by smiling or greeting someone in their native tongue I have broke down walls of ignorance, and genuine friendships were built on courage and understanding.

I teach American Sign Language to promote self-confidence in communicating with others in many ways.

What are some ways you were able to share your background with your host community? (Please give examples of projects, casual conversations, activities, etc.)

I once made a collage of all my hairstyles and shared it with my female colleagues at my aw-baw-taw (Sub-District Organizational Agency). It allowed for us to have an open conversation about our cultural differences by just talking about hair care, hair types and Dos and Don’ts of each other’s culture “norms”. One of my favorite experiences sharing a part of my background was when a friend of mine from the States came to visit; I had asked the children to come up with questions to interview my friend in English. They impressed me with their respectable questions about her origin, age, family, interests and even of her sexual identity. The best part of the visit was my friend teaching them how to dance to the latest hip hop music. This day inspired later class sessions on gender fluidity, gender-based equality, and diversity as a whole. 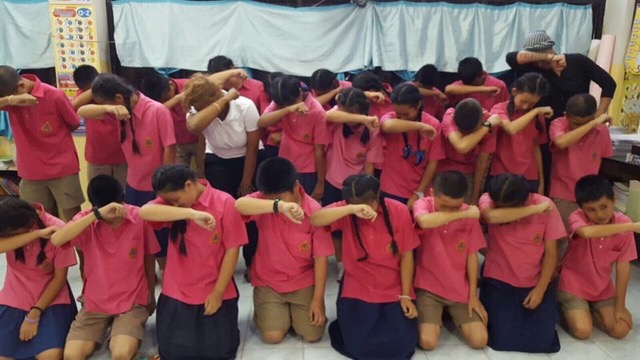 Do you think their minds will change?

I believe that I have successfully integrated into my village and I have fallen in love with a Thai family that has accepted me as their own family member. As far as my relationship with my original host family, it isn’t ongoing but I’m sure they will never forget my kindness, my confidence, and my soulful eyes. One day at dinner my host mother said, “Gigi, my sister told me to look at your eyes, they are so beautiful but I only see your skin, it’s so dark like people in the south. I should have looked at your eyes.” It was then that I knew for sure my skin complexion made her feel uncomfortable and that’s why she never really saw ME before that evening; but now that she sees me, she won’t forget these eyes and this Black woman that was in her home, who made her reevaluate how she perceives people. Forget having a picture in a frame, I’ve been imprinted in her memories… #realgoals. I only hope that next time she meets a Person of Color she will look to them for understanding rather than at them with stereotypes.

What is important to know about the country you are living in? How do they view African Americans?

My Caucasian friends/fellow volunteers have expressed to me that at times Thai people would tell them that they must cover up so that they do not tan/or get dark while riding their bikes. They often shared that most times their weight or height would be the starter of a conversation. When I am among my Non-Black friends I feel almost invisible—I was once asked to step to the side so they could take a picture with my Caucasian friend. But normally, on any given day and anywhere in Thailand, I get some sort of privilege, mainly because I am a foreigner, a guest in their country. And because I can speak Thai they’re pretty impressed and happy to be able to communicate with me. It’s important to know that Thailand is a “high context” culture, meaning they address most situations indirectly rather than speaking bluntly, in order to avoid confrontation. However, in spite of this, speaking blatantly about the appearance of others is normal. It’s often not done with bad intentions, but more so out of curiosity, lack of knowledge and longing for sameness. Therefore, I’d highly encourage others to find culturally appropriate and healthy coping skills to respond to the comments, stares, maybe even pokes and pulls. Integrate. Get to know yourself within the new culture, be flexible.

If you could tell African Americans anything about the country you are living in, what would it be?

Be your authentic self. Be flexible and open to discuss who you are and address misconceptions with fragility, love, and understanding.

My cousin got married in Phuket and shared some Thai cultural heritage within her wedding ceremony.

Has learning the language helped with integration?

Being able to speak Thai has helped me integrate with my community, bargain a good price and escape the “foreigner prices” to avoid being hustled.

In some places (mostly in rural areas, or hanging out with locals) I feel like a celebrity… I’m often put on the spot and encouraged to make a speech about who I am and where I’m from, also why am I here. I’m stared at often—many times people want to take pictures or I’m not spoken to at all.

What is your approach to handling challenges during your service?

In most challenging situations I take my time to self-reflect and attempt to make sense of the situation. I try to learn from it within the moment that it occurs or I’ll immediately share my knowledge of the situation at hand. I’d most likely address my issues by having an open and honest discussion with my fellow PCVs, my counterpart(s), or a particular group that I affiliate with for moral and/or social support; I’ve also sought support from family/friends. The perspective of others can offer a solution if I cannot develop one of my own.

What advice can you offer to future and fellow volunteers?

I highly recommend that the volunteer remain their authentic self. Even with having to face opposing morals//values, stereotypes, and indifferences, keep peace within yourself and it will flourish in your work as a Peace Corps volunteer.

What are you currently reading or listening to? 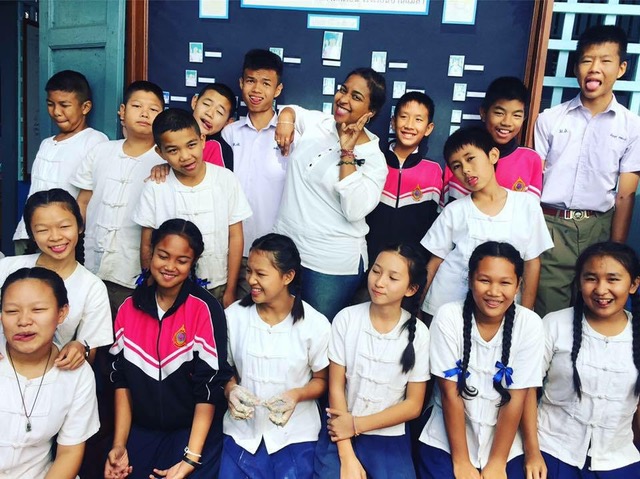