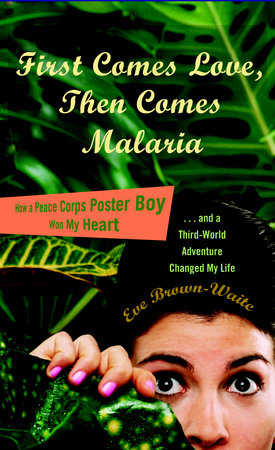 Synopsis: Author Eve Brown uses her creatively titled memoir to tell a tale of exploration, determination, and love. And not just love of the “Peace Corps Poster Boy” she falls in love with and (spoiler alert) marries, but love of foreign places and unfamiliar lifestyles.

The book first tells the story of Eve’s journey with Peace Corps, including that poster boy hunk-of-a-recruiter, John. Eve’s passion for saving the world and impressing her newfound love interest led her to Peace Corps service in Ecuador. All at once, Eve finds herself living without the comforts of home, including that dreamy recruiter who’s now her boyfriend. Amid feelings of lost purpose, homesickness and confusion, Eve finds meaning in her self-created project reconnecting homeless children with their families.

After one of Eve’s PCV friends falls victim to assault during their first year of service, Eve deals with troubling memories from her past which eventually force her to return to the USA earlier than planned. Coming home (and back to John) leaves Eve feeling like she’s failed at her attempt to live outside American comforts, especially when she compares herself to “St. John’s” Peace Corps service in Africa. John and Eve eventually marry and quickly find themselves moving to rural Uganda, where John has accepted a job with CARE.

Eve’s stories from life in Uganda tell of the adventures, tribulations, celebrations and lessons learned as an aspiring “do-gooder” living in the Third World. The author uses wit, humor, and full-disclosure to describe a life many people wouldn’t dare to even dream of.

Personal Connections and Reflections: I started this book only minutes after boarding the plane in Appleton, Wisconsin, as I headed to my very own Peace Corps Staging in San Francisco. I mention this little tidbit of personal history because it made the first few pages of First Comes Love, Then Comes Malaria incredibly surreal as the author begins the book by described her own Peace Corps application and staging process.

Overall, I enjoyed this book and the lighthearted story it tells, but I’m not sure it’ll be one I read over and over again. The book isn’t as well-written as I expected it to be, but I think part of that may simply be the author’s style. As is evident in her writing, Brown-Waite is a very “tell it like it is” kind of gal, which makes her story read more like an email or letter written from an old friend. In fact, each chapter actually ends with a letter Eve wrote during the story’s timeframe, which adds a unique, personal flavor to the already heartwarming story.

The story’s general flavor is that of challenging cultural misconceptions and miscommunications. The author puts into words the feelings, anxieties, victories, and thoughts Americans may experience when traveling or living abroad, many of which have become a very real part of my new reality as a Peace Corps Volunteer in Thailand. Unlike Eve, however, I did not have the pleasure of meeting my very own poster boy, but who knows what the future holds, right?

Regardless of the story’s quality or storyline, which many reviewers find criticisms in, this book will forever have a special place on my heart’s bookshelf, if only because it calmed my nerves as I embarked on my very own far-off adventure.

For more book reviews by Carly check out her blog: 27 Books in 27 Months