My Lunch With Ivan

Late last March, I was approached by the Peace Corps office inquiring as to whether or not I was available and/or interested in meeting and having lunch with a visiting RPCV who had served in Thailand.

That was a no-brainer.  The chance to talk with a former Volunteer that actually served in the country in which I am serving… I wasn’t provided any information but his first name.  All the more intriguing…

RPCV Ivan Smith is a member of PC Thailand Group II and a FOT member.  Amazing.  He is one of the second group of Volunteers to serve here in Thailand. His visit was primarily business related.  He was invited back to Thailand, I believe by the Thai national that was our driver for lunch-a very nice man who works in the poultry trade. Arbor Acres, a company that’s been around for more than 80 years in the poultry business.  I became aware of how fluent Ivan is in Thai as he conversed easily with his colleague/driver.

Ivan had taught mechanics at a Teacher Training School on the coast of Thailand.  One of his former students is now the principal of the school.  Ivan had helped another former student come to the U.S. and enroll in Michigan State University in a two-year Agricultural Salesman study plan.  This ambitious young man discovered that there were certain courses (he needed for return to the agriculture field in Thailand) that he could not enroll in due to lack of  prerequisites.  He ingeniously convinced professors and instructors to teach and help with hands on training in the subjects he needed (on top of his regular course load).  Subjects including:  Animal Pathology,  Micro Biology and Dairy Producing.  Currently, this same former student is renowned in Asia for teaching Animal Pathology classes. 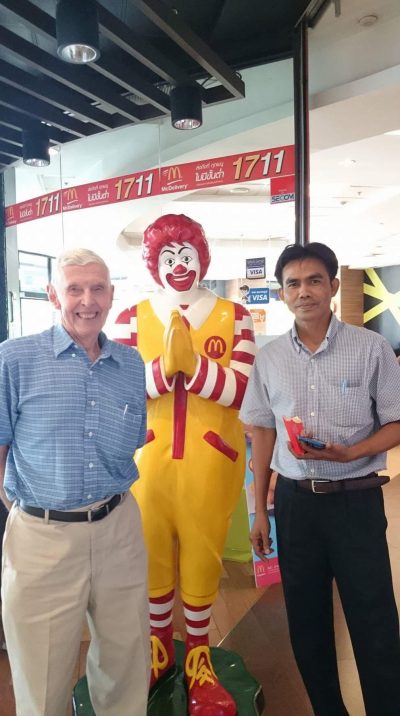 Ivan started his Peace Corps service in 1962 with a background as a Vocational Agricultural teacher.  After the completion of his two year Peace Corps agreement, in 1964,  Ivan later returned to Thailand, got married and worked in both the private and government sectors.

It was a rare chance to talk with an interesting, knowledgeable, intelligent man.  I am extremely grateful for the opportunity.