Some Volunteers adopt pets temporarily. Like foster care. They own a pet in Thailand with the plan to leave it behind with friends and/or neighbors when they go home to the US. This would not be a problem if the animals were adopted by Volunteers as adults – or in a different host country. But this is Thailand, and the standard for pet care in rural areas is infamously bad. 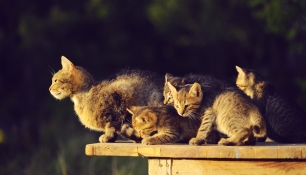 In the first three months of a cat’s life, their mother teaches them all the survival skills needed to make it into adulthood. These lessons are especially vital in rural Thailand where cats are never kept exclusively indoors. If kittens are taken away from their mothers at a young age, they are denied the chance to learn how to survive outside. And if a Volunteer leaves their cat with a Thai family, they should understand that the cat will almost certainly not be kept safely indoors.  The pet may not even be fed on a regular basis – many rural Thais believe that their pet should be able to feed itself when they go out of town or when they don’t have extra food to give them.

What I know about the animals in my village is this: only the smartest live to adulthood. The streets are filled with underfed dogs, and at night there are other predators.  One of the hardest things that I had to experience in Thailand was the sound of a cat being eaten alive by dogs. Dogs have their own style of killing, and it isn’t fast. Maybe that is why I feel so strongly that Volunteers should never adopt kittens that they do not intend to keep.  These unprepared animals are almost certainly going to die within a month or two after being left behind – unless they are left with a Thai person in a rural area who has a Western conception of pet ownership.  But be forewarned, it is not likely that such a person will be found.

Should this matter? Well, yes. It isn’t only that those creatures have been denied their chance at life, those Volunteer have also shown their neighbors that the feelings or problems of cats and dogs are completely inconsequential. While complaining to their friends and family back home that most dogs are forced to live on the streets and are not given more to eat than leftovers, they are raising a pet to expect a secure lifestyle and then abruptly disappearing from that animal’s life. Most people 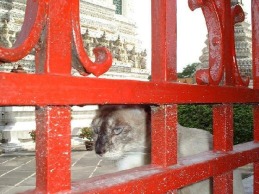 understand that putting a fat, spoiled, indoor cat out on the streets of Thailand is not going to lead to anything pretty. Even if the cat is given to a new owner, the cat will be living outside. The community will believe that the Volunteer is more concerned with what they get from their pet during their service than what happens to that pet when it is left behind.

Before you get a temporary pet in Thailand, make sure that you have a plan for how that pet will survive after you leave. They are animals, and while that means that you can technically treat them whatever way you’d like – especially in Thailand – try to show your neighbors that there is a different way. A considerate, conscious, and empathetic way to be responsible for a life. Most importantly: your pet must know from a young age how to survive outdoors with dogs, cars, and Thai children.  It cannot be kept inside all of the time – no Thai person living in a village is going to adopt your pet and let it live indoors exclusively.
The Realities of a Pet’s Life in Thailand 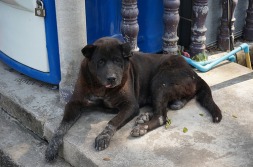 What does happen if a dog or cat is given to a Thai family? Well, obviously it depends on the family. Many Thai families give away pets when they don’t want them anymore. There are so many puppies and kittens around, it is easy to give away an old pet and replace it with an adorable younger pet. First, find out whether your pet is going to displace a pet they already own; this may indicate whether your pet has only found a second temporary owner.

Another reality: Most Thai people in rural areas do not really like cats or dogs. You may notice that you almost never see them playing with their animals, unless it’s a game at the pet’s expense. Children are not taught to be kind to animals, if anything they are taught to be very aggressive towards them. Have a candid conversation on the topic with any Thai person, and you can hear a hundred different stories of animal abuse.

You should also be aware that there is a lucrative dog meat trade in Asia. Have you noticed that there aren’t a lot of soi dogs in Bangkok? They are collected (illegally) and sent up to Isaan to for their meat. Search the internet for stories about what those dogs end up going 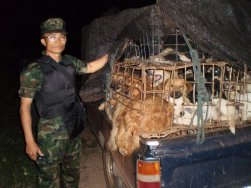 through, and remember that this is accepted by most people here as normal – if not entirely legal.

This is not meant to demonize Thai people, or Thai culture, but to illuminate the vast differences between our cultures (especially in rural areas) concerning the standards of animal care – especially how those differences will impact your temporary pet. Because our cultures are so different, just be aware that to raise a pet in the American style and then leave it to survive in the Thai style is irresponsible. Your options are: 1) Do not adopt a pet at all 2) Raise your pet in the Thai style 3) Raise your pet in the American style and take it with you to the US.