Have Yous Eaten Yet? 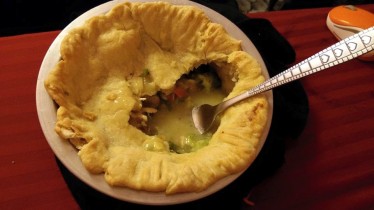 Recently, I made a delicious chicken pot pie and then shared a picture of it online to try to make the other PCVs
jealous. Unfortunately, it worked. Now I am getting endless messages asking “How do you make crust?”, “How do you make gravy?”, “Why are you so awesome?” I feel like it is my duty to include the insanely long process that ends with a delicious pot pie. I have to warn PCVs, two of the ingredients are imported from the city, but honestly I use them on a semi-regular basis to make other baked goods with my new convection oven. These imported ingredients (shortening and butter…that’s it…I have baking soda and baking powder locally, but you may not) can be used in many other recipes.

Another note, this is made using a convection oven, which is larger than a toaster oven and probably has different heat settings. This isn’t that big of a deal, since you’re actually only going to use the oven to cook the crust – just make sure the crust looks cooked. Also make sure that your pot-pie-pot fits in your oven before you do all this work. After four hours of cooking, you might become depressed if you can’t fit your pot inside your oven.

Last warning: I don’t have a cup measure, I use a cup-sized glass coffee mug that I own. I did a lot of cooking before I came here, so some of this is actually just by sight/memory. I’m sure that I am pretty close to correct in these measurements. Honestly, after two years out of the States, a few mistakes is not going to make it taste a whole lot less than awesome.

This is the longest and most tedious part of the process. It will take about two hours or more. You can definitely adjust these ingredients, as I tend to add different herbs each time. Do not go crazy with the carrots, it easily overwhelms the flavor of the other ingredients. When chopping up the vegetables and herbs, don’t worry about how pretty it is. You will throw them away before you’re done. Worry about making enough cuts to release their flavor when boiled.

Put the chicken innards into a pretty large pot of water, and make sure the water is filled up to almost the top. Put it on a medium-low simmer and put a lid on it. While it’s simmering, start chopping up your vegetables. Take your time, you don’t need to add it in immediately. Once they’re chopped up, throw them into the pot of water. Throw in the bouillon cubes too. Stir. Let it simmer, but keep an eye on it. If the water goes down, add more water. This should not be a rapid boil, this should literally be a low simmer. I tend to go and do stuff and check in every 20 minutes or so. I like to have it simmering low enough to where I don’t have to add water. After about an hour and a half, stir it up and give it a taste. If it doesn’t taste salty-delicious, add

some salt. Add pepper to taste. You will want to make it just a tad saltier than you like (teeny tiny bit saltier), because the corn starch is going to steal some of the flavor.

After about two hours (more or less, whenever you feel like it tastes good already), use some tongs to pull out your chicken. If you used chicken, rather than innards, save it to the side because you can add it to the pie later. I don’t like to only used the boiled chicken since it has had its flavor mostly boiled out. Use whatever tools

you have available to sift out the chopped vegetables and herbs. I have a tea-strainer that I can pour the liquid/broth through a little at a time after pulling out the biggest chunks.

Once the broth is clear, keep it to the side in another bowl. Warm up the (rinsed and cleaned) pot and melt your butter at a low temperature. Then add about 1/4 cup of corn starch. Use a fork or a whisk to blend the butter and the cornstarch, vigorously. If the lumps aren’t coming out, turn up the heat a little bit. Not too high, just a little. Add enough starch (a little at a time) to

where the mixture is thick but not clumpy. Then add a spoonful of your broth. Mix vigorously. Add some starch, mix, add more broth, mix. Whenever the clumps wont come out, raise the temp a tiny bit, then lower it again. Start adding larger amounts of broth, but always mix vigorously. At this point you are not going to want to add too much more starch, but you can. If you’re lucky, you will have a thick, gravy-like substance. If you’re not super lucky, you have a lumpy mess that still tastes pretty good. Sometimes, in that case, if you simmer it for a while it can fix it.

First, rub some shortening all over the inside of the pan that you’re going to use to bake your pie.

Mix the salt with the flour. Using a fork and a knife, or two forks, or two knives, cut the butter and shortening into the flour. Keep doing this for what seems like forever, until the flour looks like clumps of wet sand. At that point, grab the cold water from the fridge and add about 8 tablespoons to a small container. Then pour little bits of it, about a tablespoon at a time, into the sandy-flour mixture. After each tablespoon, use a spoon or fork or knife or whatever to mix the dough and try to get a good thick-yet-wet consistency. You almost certainly wont use all the water. Probably around 5-6 tablespoons. If you accidentally pour too much water, keep mixing it for literally a minute to see if you can force it to get thicker. If it isn’t getting thick enough, just add some flour, a little at a time, until it’s a better consistency. Try not to do this though, it makes the crust taste more flour-y.

Once your dough is set up, get some saran wrap, put it on the table, sprinkle some flour on it, put a little more than half (seriously, take half, but then take a ping-ball size more) of your dough on it, mold it into a single ball, put some flour on top, then put another piece of saran on top of that. Then use a water bottle or a can or something to push the dough around until it’s about 1/8 inch thick. Then take it out of the saran wrap, put it into your pan, and try to work it into a place where it covers the insides and reaches a little over the top of the rim of the pan. If you haven’t got enough then just grab some more and add it where it is missing, and try to rub it into place. Put more saran wrap over it and seal it. I’m pretty sure you could also just use a clean plastic bag, just keep the air out.

Take the remaining dough, and do that saran wrap flattening trick to it. HOWEVER, leave it in the saran wrap after you’re done flattening it. Put all the wrapped-up dough in the fridge for about half an hour. Use this time to cook your chicken and/or your vegetables. I baked my chicken at this point, and let it cool afterwards for 10 minutes. While cooking the chicken I did most of the recipe below, then cubed it and added it last.

1/2 medium onion, sliced
1/2 cup chopped celery (no leaves)
3 tablespoons chopped parsley
1 clove minced garlic
1 tablespoon chopped carrot
3 chopped broccoli clusters
2 chopped cauliflower clusters
1/2 chopped adorable mini-corn thing
1/2 cup peas (if you can find them, I didn’t)
1/2 cup butter
Your gravy mix
Half of a chicken, cooked and cubed
*Remember, these vegetables are mostly optional. Peas are really important, but I haven’t found any in my area so I live without them. A little carrot is also kind of a good thing since it adds a little sweetness. Too much is a bad idea.

Simmer the butter on medium-low, and once it’s melted add your carrots, broccoli, mini-corn. After the onion starts looking soft, throw down the rest of the vegetables – except the garlic and the parsley. Cook slowly, on low, and once it seems to be cooked, throw in the garlic and let it simmer for 30 seconds. Then add everything else. Stir all the ingredients together before you actually add it to the pan.

*You may not want to add all of your gravy to this mixture. If you have more than enough to fill your pan already, you might want to save the excess gravy to add to mashed potatoes the next day. If you have an insane amount of gravy, and you you have plenty of vegetables cooked in the pan, add it all and put half aside to make pot-pie again the next day. With my pan, I had enough gravy for the pot pie and two meals of mashed potatoes.

Take your doughed-up pan out of the fridge, and take off the saran wrap. Pour in your pot-pie mixture. Unwrap your disc of dough and place it on the top of the pan. Pinch the edges together with the bottom-crust. This may call for some maneuvering, you really don’t want any part of the crust to be too much thicker than the other parts. Once it looks decent, take your fork and make ridges along the edge of the pie. Then cut some holes on the top in whatever fashion you like. I just make two slices, about an inch long.

Once it looks pretty and sealed up, put it in the convection oven at 200 degrees for about 2o minutes. What you’re really looking for is the crust to look cooked – everything else is already cooked. When you think it looks a lot browner, possibly with a couple darker spots, turn off the heat. Let it sit for a little while, maybe 10 minutes, to cool. 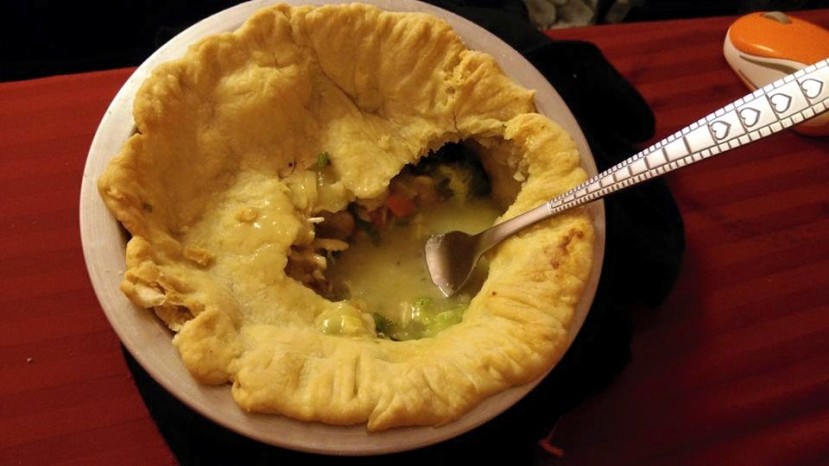 Categories: Have Yous Eaten Yet?