While America has Halloween, Thailand has ghosts. A lot of them. But the Thai word phi, actually more closely translates to supernatural scary creature. Thai people don’t fully buy into the whole, invisible dead people, scary American-style ghosts. But they do love our vampires, werewolves, and witches. With Halloween upon the American PCV, I believe it is important to have a general idea of what the Thai people find scary.

Supernatural beings that are just weird.

There are about a million women phi in Thailand, who mostly like to eat children or seduce men who urinate on banana trees. Usually these women exist without a body, or discerning taste buds.

There are also the male Phi – sometimes constructed in strange forms or smelling of strange things. 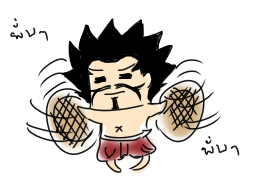 Thai commercial that features phi ban. Phi ban is the spirit of the home – typically referring to the spirit who shares your home and who you must honor to maintain their happiness … or else.