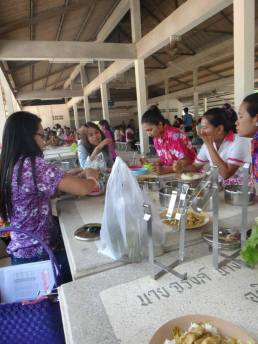 Everyday around noon in my village all of the men and women in the office come together for a very hallowed and well-practiced tradition, one that all Thai people have perfected over the ages: lunchtime. After a year and a half of living and working in my community, I really have grown fond of Thai meal customs. It’s not all about what we eat, although that is a very delicious highlight, but more importantly it’s about how we eat. The first rule of Thai meal execution is that all meals are communal. There’s always enough to go around and there’s certainly always room at the table for one more person. However this is true for all meals, breakfast, lunch and dinner so why make a big fuss over lunchtime? Well it’s because in my village it’s the perfect time to examine not just Thai eating habits but also it’s an opportunity to observe one of Thailand’s most deeply rooted social constructs. If you were to find yourself at my office during lunch the thing that would most likely stick out to you first would be the complete segregation of genders during meals. The women all sit together at one table while the men have their own space in a separate area just a few paces away from the women’s table. Now upon my arrival none of this was explained to me, there’s no real reason for it, it’s just how things are and when I inquired about it that’s all of the explanation I got.

You’ll find that here in Thailand gender divides such as that aren’t just confined to office lunch times and when I say that the social construct of gender is ‘deeply rooted’ in Thailand I mean that boys and girls learn their distinctions pretty early in life. Assigning gender roles to young ones is something we do back in America as well but between our two nations we definitely do things differently from one another. Stereotypically in the States we utilize colors to identify the gender of a newborn; pink for girls and blue for boys. However here in Thailand, to my pleasant surprise, color distinctions such as these simply don’t exist (which opened up a wide variety of avenues for me to explore how successfully I’m able to pull off the pink polo look). Instead, here in Thailand the rigidity of gender is put into motion most notably once the young ones go off to school. It is here that boys and girls start to learn their role in this crazy world and it starts by instilling a habit that sticks with them all the way into their adult lives and that’s separation of boys and girls. From this point children learn more about their predestined gender role based on what they are told by adults and what they observe in adult behavior.

A shining example of this takes us once again into the classroom where teachers will often remark, sometimes offhand and sometimes directly to students faces, how girls are smart and boys are, well, less so. This may seem harmless and in fact some of you might even be nodding in approval at the very notion of building up little girls self-esteem but there’s the other side of the coin to consider. While the bright little girls beam at every notion of their superior intellect you have the male counterpart to consider who has no choice but to conclude that since he’s not a girl he must not be smart. This thought inevitably becomes internalized and reaffirmed through the years until, sadly, the little boy just sort of falls into comfortable mediocrity. Even worse is when teachers justify boy’s naughty behavior as something that’s just inherent to the male species. Just the confirmation from an authority figure that mischievous actions are a natural tendency attributed to one gender only validates their behavior and the cycle continues. The other factor to consider here is what children pick up passively just through what they observe in adults. Thailand is a notorious collectivist culture and in this situation that translates to an endless amount of community events where children learn first-hand what their gender roles entail. Funerals are a perfect example of this because if you find yourself in attendance at a Thai funeral lunch, which is quite a common occurrence for me, you’ll immediately take note of the gender roles in place. While the women are all off together diligently prepping and serving food the males can be seen sitting together chatting away while smoking a finely rolled Thai cigarette. These distinctions are plain as day and you better believe that if I can pick up on them then so can the kids and they’re the ones that are being shaped by these instances.

So now what you’re left with is a seemingly unbreakable chain of children learning behavior from adults who they themselves were raised on this system of unflinching rigidity when it comes to these gender roles. Of course this is one of the important issues that we as volunteers try to address here in Thailand when we work with our students and it’s actually a lot less daunting of a task than I’ve made it out to be. Really the easiest way I address it in my everyday life is to just continue to act and behave as I would back in the states. Obviously I’m not referring to my tendency to become inebriated and dance naked in the streets but rather break the idea of what it means to be a “man” simply by doing everyday things that challenge that concept, which I would normally do anyway. For instance I enjoy doing aerobics in the evenings at the community center down the street from my house with all of the ladies from my village. Quite often this is met with curious looks and bewilderment from passersby but all I do is happily continue to shake my rump and smile to all my onlookers. When lunchtime rolls around at the office I’m the first one to sit down at the women’s table and I’ll sit back and enjoy the playful gossip that gets tossed around, maybe even join in if the conversation is at a leisurely pace. Even my physical appearance is often remarked upon as being stereotypically feminine and before you start asking questions I’m referring to my long hair smart ass. It’s not just me of course; this is something that I believe most volunteers pull off really well just by being who they are. It sounds super tacky and maybe a tad cliché but it’s the truth and it’s even something that was emphasized to us during our training that the biggest impact we have in our communities stems simply from our presence. I’m not here to shake up the system and bring it all screeching to a halt but my hope is that maybe by dancing with my village ladies and rocking the man bun day to day that it’ll help give some of these kids the confidence to break the mold themselves. If not, I’m gonna keep doing it anyway, I like my man bun.