You’ve spoken and we’ve listened. Finding extra time at site? The semester’s now in its first few months and things are settling down. With that comes more free time. Sure, there are options to cope with this new time like reading, going for long walks, or binge watching the new series of Orange, but after all those things you may still find that you are eager for that one-more-thing. In this issue of Technically Thailand we share the games that have tickled our toes after a long day; ranging from being a care keeper, to the ultimate fighter, across to the land of the imagination of an adventurer.

Do you have what it takes to take care of your very own alien pet?! Feed it, clean it, play with it and watch it grow up. How will YOU customize your POU? (Not to be confused with Poo although may look and read the same.) This game is free for Android, but Apple users can get the same joy for $1.99 – that’s only 60 Baht. I know it’s at least 2 bowls of noodles, but you win some, you loose some.
You should also meet Clumsy Ninja. The most hapless ninja ever to grace a touchscreen! Train him, throw him, tickle him, and even tie balloons to him. Everything you do will make Clumsy Ninja more skillful, and help him find his missing friend Kira. Sounds like an adventure to me. I’m in! I love mixing potions while training on a trampoline. Try a few your own.

For the fighters out there (I know we are all fighters deep down), EA Sports pushed out a new UFC game with excellent graphics and easy to learn and use moves. It will be just like training for Muay Thai without all the ACTUAL pain.

For the adventurers out there, free on android while $2.99 on iTunes,  Swordigo has the crowds in awe. Run, jump and fight your way through a vast world to defeat the spreading corruption. I found it’s similar to a Mario game, with portals to jump worlds, plants that try to eat you and bosses. Running on a horizontal playing field while collecting coins. I like the way lives are used in this game when you cant make a jump, you get a second try, only loosing a life when your heath meter drains. Usually at every boss I face… more than once. 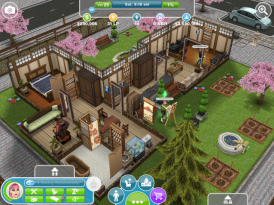 Another EA Games option, Sims Freeplay is both FREE and good for hours of entertainment. Unlike the regular PC Sims game, the money earned by individual Sims in this game are pooled into one bank account. This may seem like a negative change at first, but it turns out to be pretty useful. You can spread the money equally, or unequally, or just leave them out starving on an empty lot. There are also weekly quests to complete, goal oriented quests (where you get a bonus for finishing in a time limit), and you can also visit the Sims neighborhoods of your Facebook friends or strangers to earn social points. This doesn’t even touch on the house building – which has recently been improved to include basements, patios, and balconies. Oh yeah, there are also almost monthly updates that come with upgrades to the game or additions to the neighborhoods. This is a definite must.

Pocket Frogs is a frog collection game. Seriously. But, if you’re into this kind of game, it is perfect at what it is.
There are literally thousands of combinations and styles of frogs, and you get access to the cooler ones the higher up in level you go. You get experience by breeding frogs or playing frog racing (or other styles of) games, and you can gain extra potions and stamps by providing a specific breed of frog (with the correct color combinations) or a small collection of five different requested frogs. There are daily rewards, an index of all of the thousands of frogs and a

notation of the percentage of each breed you have already bred. You can also visit friends frogs, and see what they’ve bred. It isn’t an action game, it’s more of a “I have more frogs than you, and I can give you cooler frogs than you can give me” game.

My Talking Tom is another pet game, but this one is widely used by your Thai friends. You basically get a cat, named Tom, who has a standard breed when you first start. As you play
games, feed, wash, and allow Tom to use the bathroom, you get access to different outfits and house decorations. You can also pet him, put him to bed, slap him silly, and knock him down.  You can visit and rate other “Toms”, and play a lot of good mindless games within this app. The thing that many Thai people love about this game is that you can say stuff to your Tom, and he will repeat it back to you in this really obnoxious high-pitched voice. Search YouTube. It is a thing.

If you want to tantalize your Thai kids, just download Temple Run, which requires you to tilt your device to one side or the other, and swipe your fingers to get your little running man to take sharp corners – or die. You also have to think fast to jump over or under tree stumps, ropes of fire, and gorges. If anything, it will get your adrenaline running!

For those who are more into gun action, there is the Sniper Shooter game, which is all about shooting criminal masterminds who look like little stick figures. It also involves tilting your device, and is definitely a game you want to play when there are no little children peeking over your shoulder. Each level of the game is basically the same.
#1 You are told about an evil mastermind (or two, or three, or five)
#2 You are given instructions on how to shoot them, whether it has to be in five seconds, or without anyone witnessing it
#3 You are a first person shooter from a window, viewing the street through your sniper scope, and you have to find your target and “eliminate” them
#4 When you are done, you are either a success or a failure. You get stars on your speed and accuracy, and if you pass you get the next mission.
Simple maze/puzzle games are abound on devices, one of the most simple and popular is the Flow Free game. It is basically a box made up of multiple squares with different colored dots in random squares. You have to touch a dot, then draw a line from that dot to a dot with the same color. You do this with all of the dots, but the trick is you have to fill all of the empty squares. It can be timed, or free play.

Finally, if you have regular access to internet and feel like you have some free time to burn, check out addictinggames.com. There are literally thousands of games on this site, and almost all of them will waste at least an hour of your time and will possibly leave you feeling strong and intelligent. Some of my favorites are: Bloons Tower Defense 4 – Use monkeys to keep balloons from beating your maze, Mushroom Farm Revolution – Use mushrooms to stop various evil creatures from beating your maze, and Age of War – a simple game where your home is about twenty feet in front of your enemy’s (computer’s) home, and as you gain points you progress through the ages and get new weapons to kill their soldiers. There are literally over 3,000 more short games on this site that range from strategy to action to car games.