Dok Krachiao Blooming Festival
When: 1st June – 31st August
Where:Pa Hin Ngam National Park, Chaiyaphum
What: Held over two months each year, the Blooming Krachiao Flower Festival celebrates the dok krachiao flower which blooms at this time of the year. Known as the ‘Siam tulip’, the sight of these pinkish-purple flowers in bloom is a wonderful spectacle.

When: June 12, 5PM-2AM
Where: Bitec Convention Center
88 Bangna Tray Road Km 1, Bangkok
How much: Tickets are B2,800
What: An internationally celebrated electronic concert, featuring DJs from around the world, and hosted annually in Miami, Japan, and Korea.

Master of the Cello

When: June 12,2015 – June 13,2015
Where: Nakhon Pathom
What: Principal cello of the Cleveland Orchestra Mark Kosower joins TPO for a performance of Dvorak’s Cello Concerto. 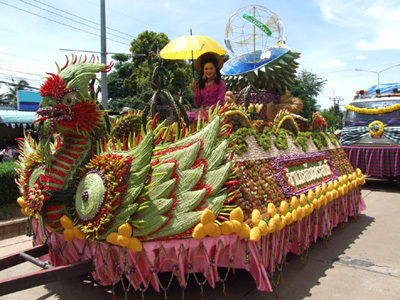 Si Sa Ket’s Rambutan-Durian Fair
When: June 19,2015 – June 25,2015
Where: Si Sa Ket and Technology College, Mueang District, Si Sa Ket Province
Contact:
• Si Sa Ket Office of Agriculture :Tel.045 – 611397
• Si Sa Ket Community Development Office :Tel.045 – 611645
What: Organized annually in June at the ground in front of the district offices of Kantralak of khun Han (alternating yearly between the two districts). There are numerous activities such as the selling of fruits and crops of the province. There is a Fruit Float parade, technical exhibition and caravans to visit various fruit orchards.
Link: Website

Sunthorn Phu Day
When: June 26,2015
Where: At Sunthorn Phu Monument, Rayong Province
What: In late June each year, Rayong honours its most famous poet with a special ceremony. The festivities happen at the Sunthorn Phu Monument in Klaeng, and feature readings and other interesting events promoting the literary arts of Thailand. On Sunthorn Phu day, the students take part in writing competitions and listen to his poems. 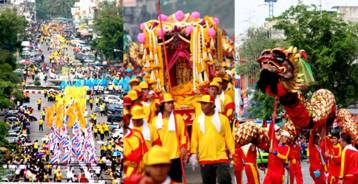 When: June 26,2015
Where: City Pillar Shrine of Samut Sakhon’s Dam, Samut Sakhon
What: Join in the worship and seeing the great city pillar shrine parade not only at the land but also in water and the entertainment.

**Bun Luang and Phi Ta Khon Festival
When: June 26- June 28,2015
Where: Dan Sai District, Loei Province
What: The Phi Ta Khon festival is unique to the Dan Sai district in Loei Province and reflects the local Issan belief in ghosts and spirits. Held once a year, it is part of a grand merit-making festival known as the “Boon Luang” festival.